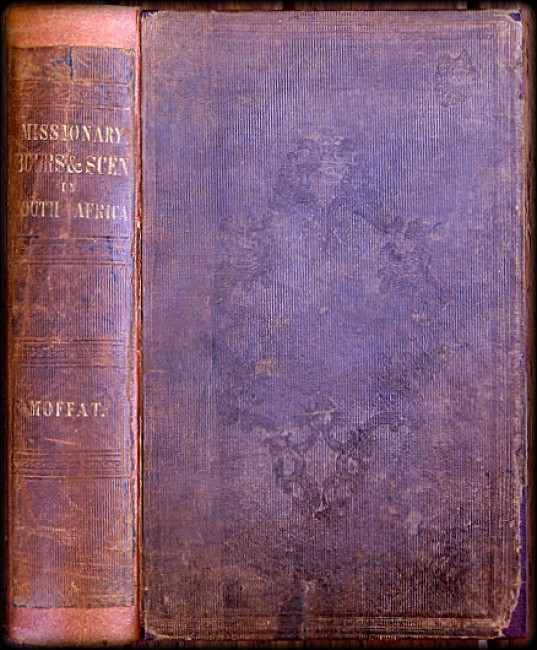 624 pages. Original (re-backed) blind stamped cloth with gilt titling on the spine, new end-papers. Colour frontispiece (one of very few illustrations printed by the Baxter process in books of African interest. This plate was also sold separately as a print to raise funds for the work of the mission), folding map, 8 engraved plates (of which 3 are facsimile replacements), engraved illustrations in the text. Deckled edges.

The hand-coloured frontis and title pages have been professionally backed/reinforced with fibre-tissue, forming an attractive frame around the colour frontis. Heavy toning to both these pages with a few stains to title page. Previous owner's name has been penned in fountain ink to top of title page. Clear adhesive backing/repair work done to pages 133 and 136. The book has been re-backed with original spine and blind embossed cloth boards retained. New corners have been applied. The contents are generally clean apart from some light foxing to certain pages and a few more stains to some of the engraved plates. The bindings are tight.

Mendelssohn (Sydney) South African Bibliography, volume 2, page 29. 'The preliminary chapters deal with opinions of the author on the origin of the Hottentots, and gives a synopsis of the early work of the London Missionary Society in South Africa, reference being made to the labours of Drs. Vanderkemp and Philip, and other pioneer missionaries who predated Mr. Moffat. The volume gives a valuable account of mission work among the Bechuanas, with notes on the customs of the natives, and a description of the earlier travels of the author... There are some particulars concerning Dr Andrew Smith's expedition into the interior in 1835, and there is an ample account of the labours of the various missionary societies engaged amongst the Bechuanas, Matabeles, Basutos and other races at this period'.

Colour Frontis by George Baxter (1804–1867), who was an English artist and printer based in London. He is credited with the invention of commercially viable colour printing.

At 20 Baxter was illustrating books printed by his father; at 23 Baxter moved to London to be apprenticed to Samuel Williams, a wood engraver. In 1827 Baxter set up business on his own and married Mary Harrild, daughter of Robert Harrild, a printing engineer and a friend of Baxter’s father. Baxter now began to experiment with his own methods of colour printing – his first known colour print, Butterflies, was published in 1829. Baxter's experiments first bore commercial fruit in 1834, with two small vignettes published in Mudie's "British Birds".

In 1835 Baxter was granted Patent No. 6916 – Improvements in Producing Coloured Steel Plate, Copper Plate and other Impressions, which outlined the combined intaglio and relief process he would continue to use for the next thirty years. Baxter’s original patent ran for 14 years; after the renewal of his patent in 1849 for another five years he began to sell licenses for the use of his printing process to other printing firms.

Despite his technical excellence and the general popularity of his prints, Baxter’s business was never profitable – his process was laborious and it seems likely that his perfectionism prevented him from completing many of his commissioned works on time. In 1860 he held a sale of all his stock and equipment, most of which was not sold. Eventually he sold his plates and blocks to the printer Vincent Brooks, who later republished some of Baxter’s images. Baxter was declared bankrupt in 1865 and died in 1867, after an accident involving a horse omnibus.

Travel and Adventure in South-East Africa