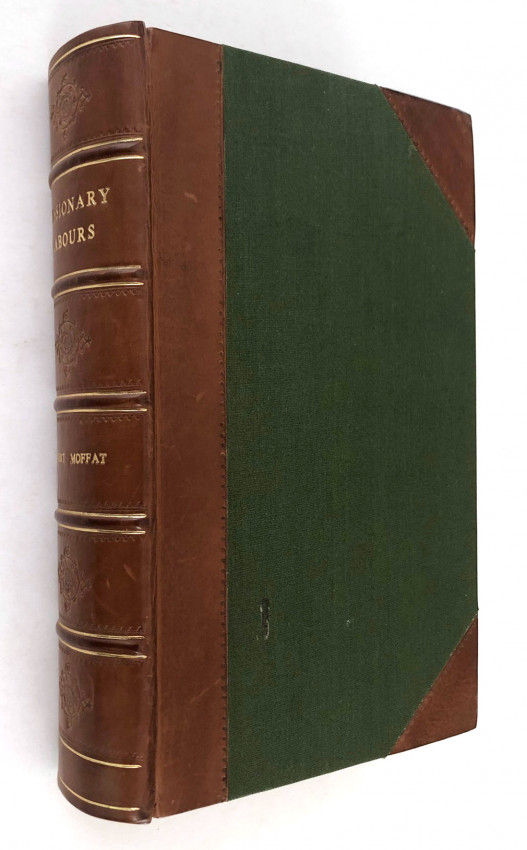 This is the first edition, first issue (one of the first thousand copies) of this title of which 106 editions were published between 1842 and 2019 and held by 923 WorldCat member libraries worldwide. 1842. 8vo. 624 pages with 12pp. of advertisements at the rear. With the coloured frontispiece of the Mission, a folding map of South Africa and circa 21 black and white engravings, some full page. Handsomely rebound in half calf and cloth, the spine with five raised bands, gilt titles and decorations in blind. All edges uncut.

Some minimal spotting of the prelims otherwise a clean attractive very good copy.

Loosely laid in is a circa 40 word autograph sentiment/poem signed by Moffat, written on a piece of light cardboard measuring circa 15 x 10cms. and laid down on a slightly larger page annotated with the owner's name on the verso. (see image). This inscription or something similar seems to be one which Moffat used more than once and I have located an image of one such online.

Missionary Labours and Scenes in Southern Africa is Moffat's best know book. The book outlines South African missions before Moffat and then recounts his experiences in Lattakoo and later Kuruman, his visits to Moselekatze, and his work from 1817 until 1840. He then continued at Kuruman until 1871, when he returned to England and died there in 1883. The Missionary Labours must have been a great success when it was first published. The copy in the Strange Collection has 'Fifth thousand' on the title-page; while the British Museum lists 4th. edition 1842 and 11th. thousand 1846. Fairly scarce in the first issue as offered here. "Missionary Labours is a very good book and a very important item of Africana..." (Africana Repositary, R.F. Kennedy, Juta, 1965).

For interested parties, please view the lot of two scarce Moffat biblical works/translations (one inscribed) which is also listed on this auction.

A GRAMMAR AND VOCABULARY OF THE NAMAQUA-HOTTENTOT LANGUAGE

The Rev, Charles Gray (Edited by)