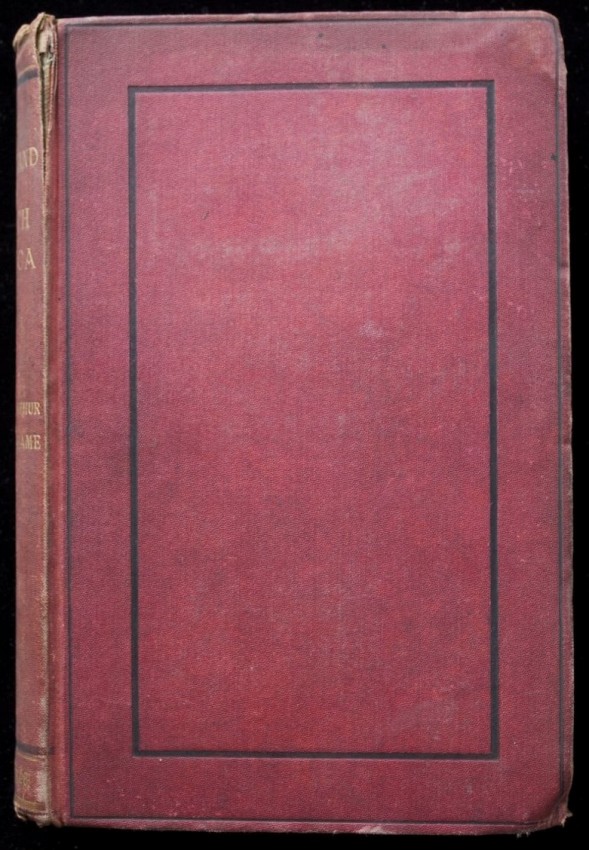 376pp + 39pp advertisements at rear. Three maps. Contents clean. Binding tight although with some age associated wear and a short cloth split at the top of the front hinge.

Quite an uncommon title as the first edition comprised of just 1000 copies. Mendelssohn only had the second edition of 1880 at his disposal.

This copy has a very interesting provenance as it once belonged to Colonel William Johnston, C.B., L.L.D., M.D., Army Med. Staff.  Johnston was a medical officer of the army and a well-known antiquarian. He became surgeon-major of the army in 1877.  From the British Medical Journal, Jan. 2, 1915, page 54: "He saw active service in South Africa in 1878 and again in the Zulu War in 1879. He was mentioned in dispatches and received a medal and clasp. He commanded a bearer company in the New-Castle Field Force in the first Boer War of 1881. During the Boer War he accepted temporary employment, from 1899-1901, at the War Office as assistant director-general of the Army Medical Department. For his services at the War Office during war he was made a C.B. and promoted to the rank of colonel in 1902."  Johnston was also author of many genealogical books and biographies.

From Mendelssohn, Vol.I, page 400: 'There are some interesting details respecting the condition of affairs at the Diamond Fields, the author having visited the River diggings, as well as the group of mines around Kimberley. There are notes on Lobengula and the Mashonas, mostly taken from a letter which appeared about this time in the Diamond News (Kimberley), in which it was stated that the King "is doing his best by every artifice that he can devise to keep the white man out of his country," and told all applicants that there was no gold there, finally saying to a would-be prospector, "I will not allow you (the English) to go into the country, or if I did I might as well give it to you."

Allusion is made to the dismissal of Mr. Molteno and his ministry by Sir Bartle Frere, and it is said of the former that "he showed such contempt for the authority of the Governor, and enunciated such extraordinary views of constitutional government, that the High Commissioner was obliged to request his Government to resign. It is stated that the Cape Premier evidently considered that the Governor and the Queen were ciphers whose only duty was to give a formal assent to the doings of himself and his war minister, Mr. Merriman." With regard to the latter, it is observed that "he was a man of talent and energy, but his thirst for power almost amounted to a mania...he was totally incompetent to conduct the Colonial War Department. His ignorance of military matters was only surpassed by the obstinacy of his determination not to learn the principles of war."