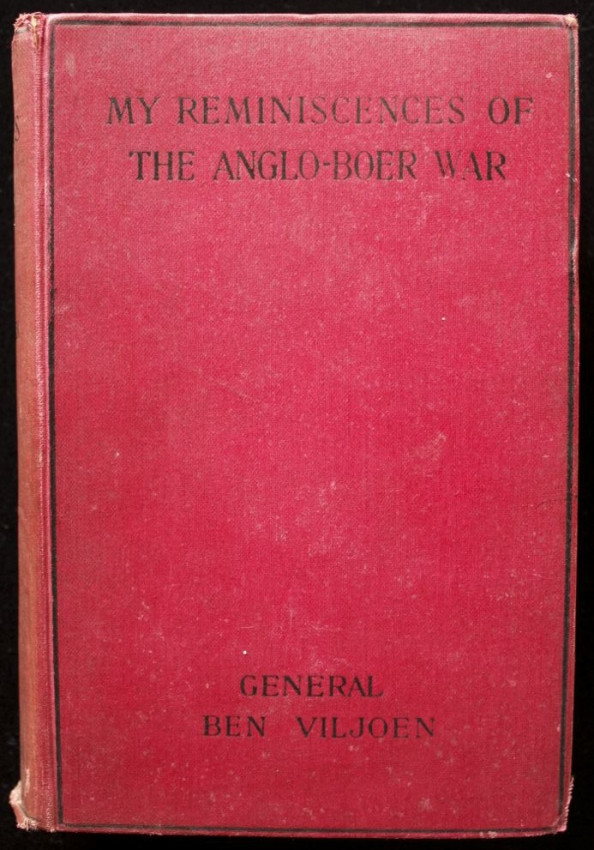 Signed on the front endpaper by both Generals Ben Viljoen and Piet Cronje.

After the Anglo-Boer War Generals Ben Viljoen and Piet A. Cronje went to the U.S.A to participate in a show at the Louisiana Purchase Exhibition (also known as the Saint Louis World's Fair) of 1904, where all the famous battles of the War were re-enacted. The show was popularly known as the 'Boer War Circus' and was viewed by an estimated two million people. General Cronje's capitulation at Paardeberg was also included as one of the reenactments. At home in South Africa, however, he was derided in the press as 'The Circus General', as resentment still ran high due to his failure and bad judgement at Paardeberg, where four thousand Boer soldiers were captured, without a single shot being fired. It was a unfortunate turn of events for the man who was otherwise known as both the hero of Majuba Hill, as well as the man who arrested Dr. Jameson during his infamous raid into the Transvaal.

General Viljoen never returned to South Africa as he refused to become a subject of the British Empire. In 1909 he was granted U.S. citizenship. He was familiar with both Theodore Roosevelt and Mexican Revolutionary Francisco Madero. He fought on the side of Madero at the battle of Ciudad Juarez.

His book is described as being 'a realistic description of the war from a Boer perspective'.

Some excerpts from Mendelssohn Vol.II:

'The author was instructed by General Joubert to proceed to the Natal frontier, and he subsequently joined the troops under General Kock's command. He does not appear to have had a high opinion of his leader, and remarks, possibly if we "had had less to do with arrogant and stupid old men, we should have reached Cape Town or Durban." From time to time he expresses his discontent with most of the Boer Generals of the old school, and he was extremely impatient of their super-caution, credulity, and superstition, which brought him on several occasions to the verge of insubordination, whilst at times he considered that he had been slighted by Joubert, who appears to have been dubious as to the courage of the leader and his Johannesburg men.'

The so-called Handsuppers 'were regarded by the General as traitors, and there is an account of the " execution " of Meyer De Kock who came to Viljoen's camp to induce his men to surrender, and who, it is stated, was the first man who first suggested to the British authorities the establishment of concentration camps. The Boer General defends the blowing up of trains, which he considered quite as justifiable as the burning of houses, and was, he asserts, no doubt as distasteful to him as the latter was to Lord Kitchener.'

'He was sent to St. Helena on February 19th, and speaks with some dissatisfaction of his treatment on the island.'