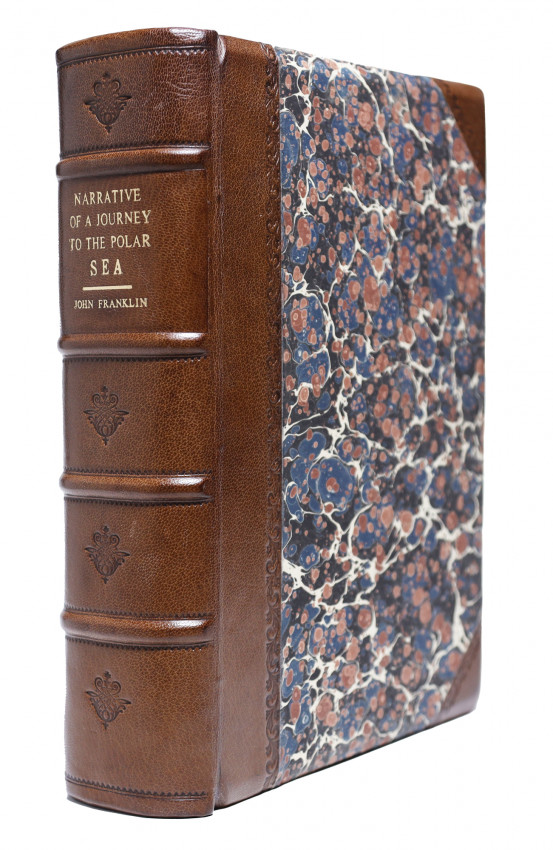 NARRATIVE OF A JOURNEY TO THE SHORES OF THE POLAR SEA

Illustrated by numerous plates and maps

First edition First issue with the errata slip : ix, 768 pages, 4 folding engraved maps not bound in the correct order according to the list - the maps are linen backed and have not been restored, the large one has tears at the folds, 30 engraved plates including 4 plates of plants – 9 hand coloured, errata slip tipped in, rebound in half brown morocco with matching marbled boards, titled gilt on the spine with blind decoration, new end papers, light foxing and staining throughout, a good copy.

Franklin entered the Royal Navy at age 14, accompanied Matthew Flinders on his exploratory voyage to Australia (1801–03), and served in the Battles of Trafalgar (1805) and New Orleans (1815). He commanded the Trent on Capt. David Buchan’s Arctic expedition of 1818, which sought to reach the North Pole.

From 1819 to 1822 Franklin conducted an overland expedition from the western shore of Hudson Bay to the Arctic Ocean, and he surveyed part of the coast to the east of the Coppermine River in northwestern Canada. After his return to England, he published Narrative of a Journey to the Shores of the Polar Sea, in the Years 1819, 20, 21 and 22
https://www.britannica.com/biography/John-Franklin