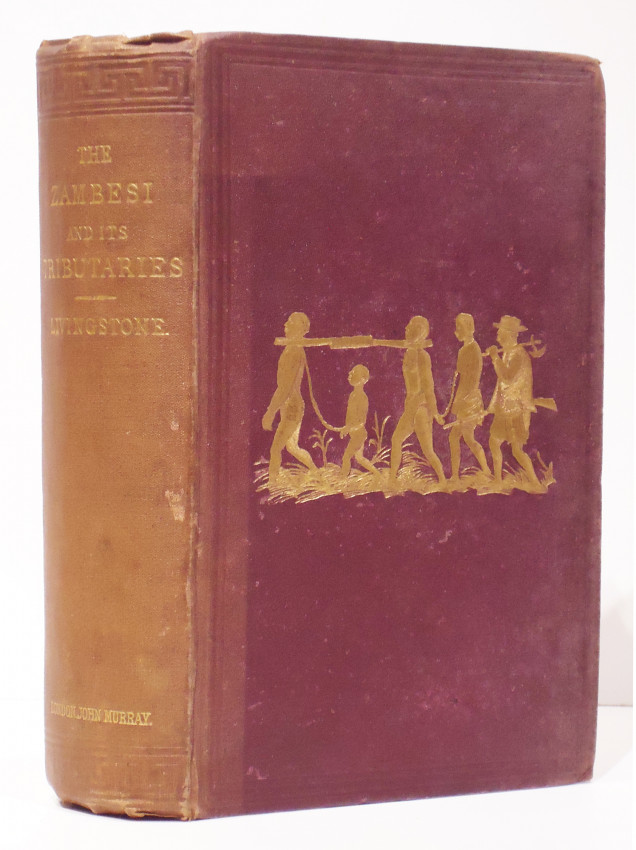 NARRATIVE OF AN EXPEDITION TO THE ZAMBEZI & ITS TRIBUTARIES

Mendelssohn (Sidney) South African Bibliography volume 1 page 915-6: In the year 1857, David Livingstone severed his connection with the London Missionary Society, on the most friendly terms with that institution, and accepted the position of H.M.S. Consul at Quilimane, at the same time taking the leadership of the " Zambesi Expedition," which was fitted out by the British Government, " to extend the knowledge already attained of the geography and mineral and agricultural resources of Eastern and Central Africa."

The first object of research was the river Zambesi, its mouths and tributaries, with a view of discovering a serviceable water-highway into the interior, and the Kongone being ascertained to be the best of the mouths, the river was ascended in a small steam launch which had been brought in sections on the Pearl, which soon after returned home. On his arrival at Tete, Dr. Livingstone was greeted with much joy by the Makalolos, whom he had left there during his absence in England, and whom he eventually took back to their homes. In the course of the exploration of the Shire River, Lake Shirwa was discovered, on April 18, 1859, an( l on September 16 he arrived at Lake Nyassa about two months before Dr. Roscher reached it.

The Portuguese asserted, however, that Livingstone had not discovered the lake, and endeavoured to prove that they had known of its existence previously, but it appears that their object in making this statement was to make good their claim to the country. The launch, Ma Robert, was found to be a most unserviceable steamer, and eventually Dr. Livingstone had to send the engineer, Mr. Rae, to England, to have another boat built. In the meantime he revisited the Victoria Falls, taking his faithful Makololos back to their country, where they were received by their chief Sekeletu ; the expedition remained for about a month at Shesheke, returning to Tete on September 17, i860. A few weeks later, the new boat {The Pioneer) arrived, and Bishop Mackenzie accompanied the party on a short exploring voyage up the Rovuma, after which they returned to the Zambesi, and, proceeding up the river, entered the Shire. Returning to the Zambesi, Livingstone met his wife ; but about the middle of April, Mrs. Livingstone fell ill with fever, and died on April 27, at Shupanga.

The exploration of the Rovuma was recommenced with the new steamer, and Livingstone returned to the Zambesi in the beginning of the year 1863, but on the 19th of May Charles Livingstone and Dr. Kirk, who had been seriously ill, returned to England, and soon after Earl Russell recalled the expedition.

Trails of the Hunted