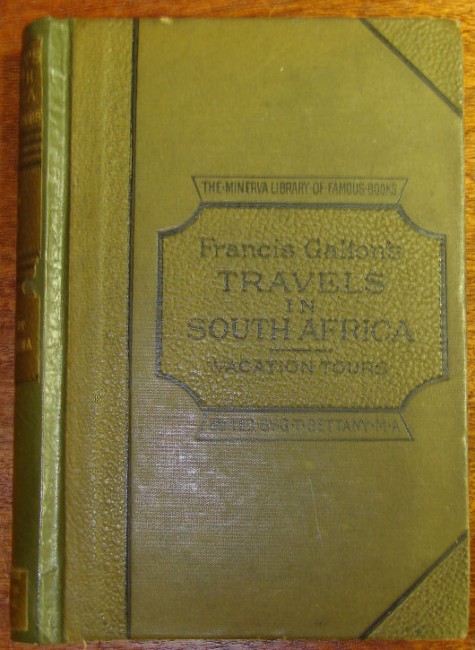 Narrative Of An Explorer In Tropical South Africa : Being An Account Of A Visit To Damaraland In 1851

The Minerva Library Of Famous Books,  edited  by  G. T. Bettany.
This  edition  contains  the  preface  to  the  first  edition, as  well  as  a  new  preface  by  the  author, especially  for  this  edition. Olive cloth boards with black and gilt titles - Pebbled cloth &  Skivertex. Recased  with  repairs  and  new  end-papers.Corners  bumped.

The  following  information  is  taken  from  Wikipedia :

Galton had a prolific intellect, and produced over 340 papers and books throughout his lifetime. He also created the statistical concept of correlation and widely promoted regression toward the mean. He was the first to apply statistical methods to the study of human differences and inheritance of intelligence, and introduced the use of questionnaires and surveys for collecting data on human communities, which he needed for genealogical and biographical works and for his anthropometric studies.

He was a pioneer in eugenics, coining the very term itself and the phrase "nature versus nurture." His book, Hereditary Genius (1869), was the first social scientific attempt to study genius and greatness.As an investigator of the human mind, he founded psychometrics (the science of measuring mental faculties) and differential psychology  as  well  as  devising a method for classifying fingerprints that proved useful in forensic science.

As the initiator of scientific meteorology, he devised the first weather map, proposed a theory of anticyclones, and was the first to establish a complete record of short-term climatic phenomena on a European scale. He also invented the Galton Whistle for testing differential hearing ability".