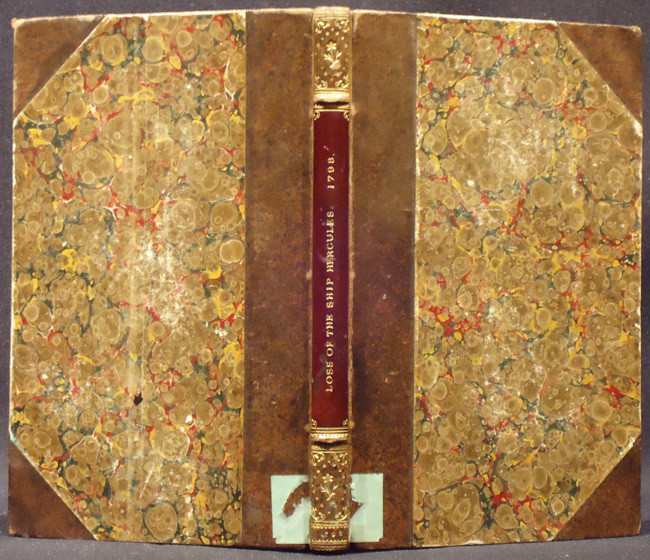 NARRATIVE OF THE LOSS OF THE SHIP HERCULES,

Commanded by Captain Benjamin Stout, on the coast of Caffraria, the 16th of June, 1796:

also, a circumstantial detail of his travels through the southern deserts of Africa and the colonies, to The Cape of Good Hope.

With an introductory address to The Rt. Honourable John Adams, President of the Continental Congress of America.

First edition:112 pages, rubber stamp at the top of the title page and at the end of the text and at the head of page21, nineteenth century half calf with a maroon title label and gilt decoration on  the spine, marbled paper sides and endpapers, silk place marker, light rubbing  along the edges, a very good copy.

Mendelssohn (Sidney) South African Bibliography, volume 2, page 445, ‘Captain Stout’s ship went ashore in a great gale “a few miles distant from the mouth of the river Infanta,” a place localised by Theal as being “between the mouths of the Keiskama and Beka rivers.” He and his crew were well treated by the tribesmen, who assisted them, directing them how to proceed to the nearest European settlements, and furnishing them with guides.

On starting the party consisted of sixty men, but only twenty-four arrived at the residence of Jan Du Pliesjes, the others being  left behind from time to time, although some of them eventually arrived in the Cape Colony. The farmer showed the shipwrecked sailors the utmost hospitality and lent them a wagon, oxen, and Hottentot drivers, with whose assistance they eventually arrived in Cape Town……They arrived at Cape Town on July 30, 1796, and it is stated that they were received by General Craig with some abruptness, and in an unsympathetic manner, but that Admiral Elphinstone did everything in  his power to assist them.