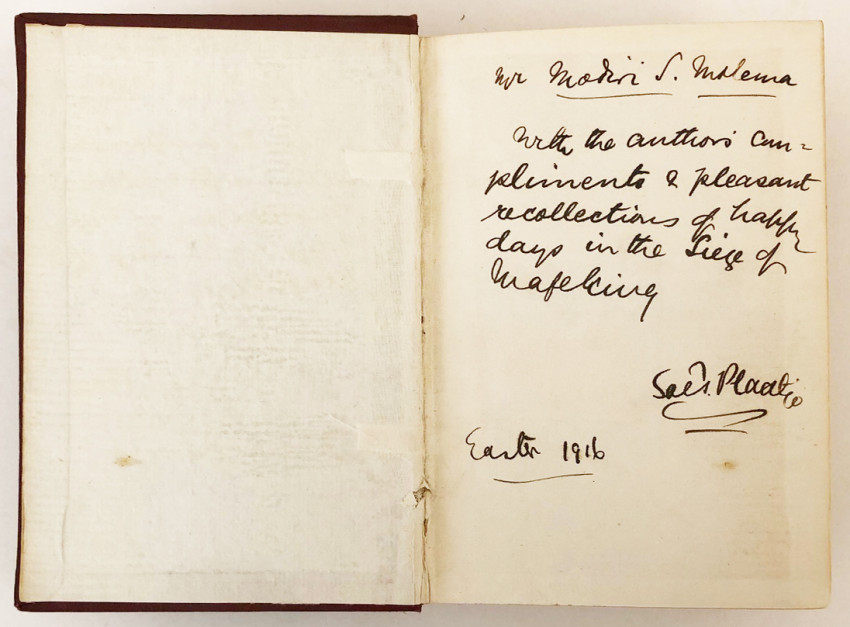 The scarce first edition of Plaatje’s major opus in which he responds to the recently passed discriminatory 1913 Natives Land Act and deals with the protest campaign of the S. African Native National Congress against the Act and his participation in the deputation to the British Imperial Government. At the same time it tells the bigger story of the assault on black rights and opportunities in the newly consolidated Union of South Africa.

This copy is inscribed on the front free endpaper as follows: “Mr Modiri S. Molema/With the author’s com/pliments & pleasant/recollections of happy/days in the Siege of Mafeking/Sol T Plaatje/Easter 1919”. A very good plus, tight, clean copy in the original red cloth with black lettering on the spine and front panel. Some marginal annotations, presumably by the owner, Modiri Molema.

Solomon Tshekisho Plaatje was a South African intellectual, journalist, linguist, politician, translator and writer. Plaatje was a founder member and first General Secretary of the South African Native National Congress, which became the African National Congress. He authored several books of which the most important was Native Life in South Africa, the title on offer here. Plaatje  edited a number of Bantu language newspapers including Koranta ea Becoana ( The Bechuana Gazette ) 1902- 1905, a weekly paper in English and Sechuana, which was financed by his friend, Chief Silas Molema (the father of Modiri Molema, to whom this book is inscribed). Both Silas and Plaatje were on the side of the British during the Siege of Mafeking, where Plaatje acted as both court interpreter and clerk to the Mafeking administrator of Native affairs. His experiences were recorded in a Diary (The Boer War Diary of Sol. T. Plaatje) that he kept and which was published for the first time in 1973.

The Molema Family play an important role in South African history. Molema Tawana (c. 1822 – January 1882) was the Barolong Chief and founded the town of Mafeking, which was origninally called Molema’s Town. His heir and oldest son, Silas Thelesho Molema was the next chief of the Barolong and friend and benefactor of Sol. Plaatje. It was to Silas’s son, Seetsele Modiri Molema (1891 – 1965), also known as Silas Modiri Molema after his father, that Plaatje gave and inscribed this book, sharing as he says “happy days in the Siege of Mafeking”. Modiri would only have been a boy of about 8 at the time of the Siege. He subsequently had a distinguished career. In 1914 he went overseas to study Medicine at the University of Glasgow. He would have been in the British Isles when Plaatje published Native Life in 1916 and it is more than likely that he was given this book personally while he was there, as the inscription is also dated 1916. Before returning to South Africa, Dr. Molema wrote an acclaimed history book entitled The Bantu, Past and Present; an Ethnographical & Historical Study of the Native Races of South Africa. Though the book was about Black South Africans in general, the primary focus was the history of the Batswana. On his return to South Africa, he commenced his practice in Mafikeng and from the beginning he distinguished himself as a medical practitioner of exceptional ability with a large practice serving both White and Black South Africans at Mafikeng and distant towns like Johannesburg. Molema is the author of some useful pamphlets on health. Amongst several other publications by Dr. Molema, an English translation of his biography of Sol Plaatje (originally written in Setswana, entitled  Lover of His People: Sol Plaatje, was published by the Witwatersrand University Press in 2012. The original Setswana version of this title is housed in the Plaatje/Molema collection at Wits University. In this book, Molema references this very copy and quotes the inscription within it. In the 1940s, Dr Molema was involved in the African National Congress (ANC) and he became its National Secretary in December 1949. He also served on the African Advisory Council, Joint Advisory Council, and the Constitutional Committee that set the Bechuanaland Protectorate on its road to independence as a Republic of Botswana.

The relationship of Plaatje to the Molema family, their joint involvement in the Siege of Mafeking and the fact that Modiri Molema was to become Sol Plaatje’s  first biographer, make this copy of Native Life in South Africa an Association Copy of major significance.