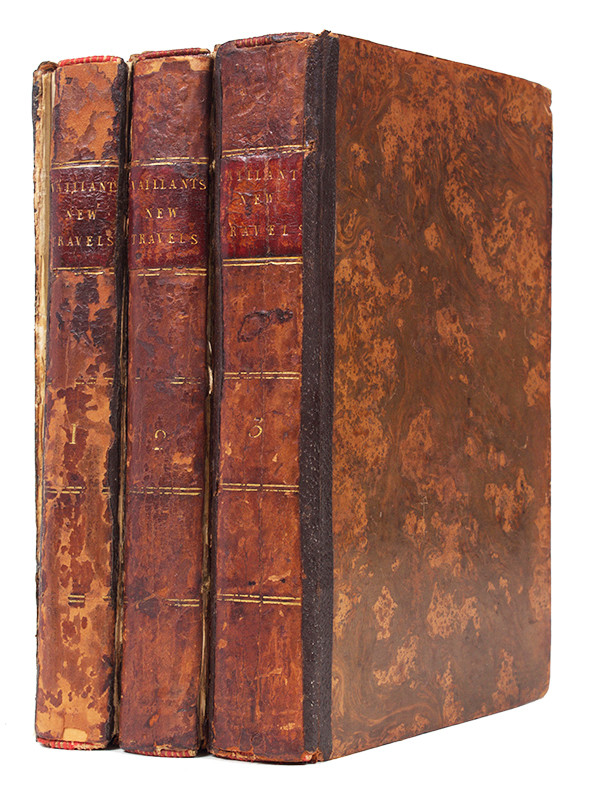 NEW TRAVELS INTO THE INTERIOR PARTS OF AFRICA

Translated from the French of Le Vaillant

Delineated with a map, delineating the route of his present and former travels, and with twenty two other copper plates

First English edition: 3 volumes vol 1: l, 288 pages, vol 11 : 383 pages, vol 111 : 488 pages, full mottled calf, red title labels gilt on the spines, all the volumes have been rebacked preserving the original back strip, but the back cover of vol 1 is almost detached and the front cover of Vol 11 is detached, foxing throughout, the map has been clumsily folded, contents are bright, a good set.

During his stay at the Cape Le Vaillant made two extensive journeys into the interior. His second major journey, from about June 1783, proceeded northwards via Piketberg, Heerenlogement (where he engraved his name, "Vailant" on the cave wall), Koekenaap (with a diversion to the mouth of the Olifants River), the Kamiesberg, and Simon van der Stel's* copper mine to the Orange River at Goodhouse and Ramansdrift. Returning to Cape Town he stayed with Colonel Gordon again. He left the Cape in July 1784, arriving in Holland in November.

After his return to France Le Vaillant spent years organising his collection and writing up an account of his travels. A description of his first expedition in South Africa, Voyage de M. Le Vaillant dans l'interieur de l'Afrique par le Cap de Bonne-Esperance, dans les annees 1780, 81, 82, 83, 84, & 85, edited by his father, was published in Paris in 1790 (2 vols).

An account of the second expedition, Second voyage dans l'interieur de l'Afrique, par le Cap de Bonne-Esperance, dans les annees 1783, 84 et 85 (Paris, 1795, 3 vols) proved equally popular. English translations, titled Travels into the interior parts of Africa... and New travels into the interior parts of Africa... were first published in 1790 and 1796 respectively. The books were also translated into German, Dutch, Italian, Swedish and Danish, and did much to draw international attention to the Cape. https://www.s2a3.org.za/bio/Biograph_final.php?serial=1672