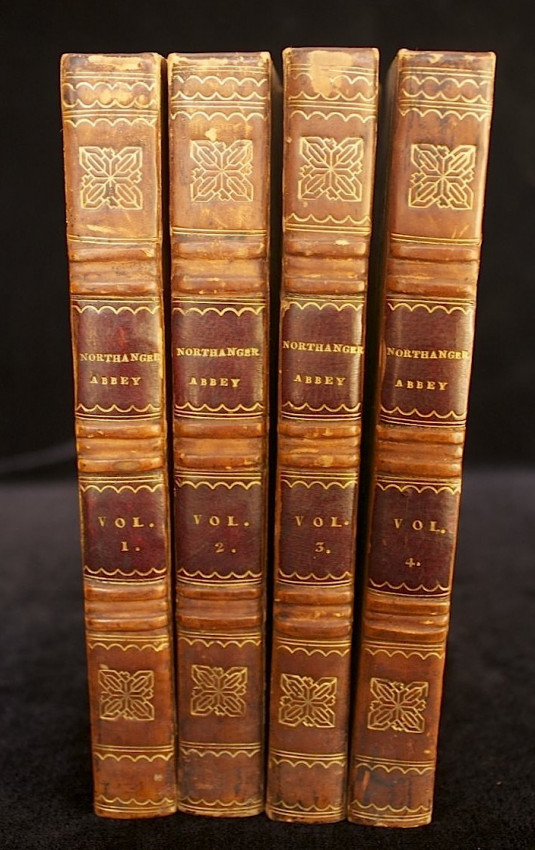 An exquisite true first edition set of Jane Austen's first and last novels. Northanger Abbey (Vols. I & II) was submitted for publication in 1803 but was never published in the author's lifetime and only appeared five months after her death. Persuasion (Vols. III & IV) was the last novel she wrote and was published simultaneously with Northanger Abbey in this tandem edition of four volumes - her only four-volume publication.

The publication had a print-run of only 1750 copies and, according to David Gilson (A Bibliography of Jane Austen, Oxford University Press, 1982, page 84)  "Publication clearly took place late in December 1817 (although the date 1818 appears on the title pages)".

"Initial sales were rapid, totaling 1409 copies, leaving only 321 on hand by the end of 1818 (after the disposal of 20 copyright copies and other presentation copies)" - Gilson, page 84.

This copy is in its original and exceedingly rare period binding and still retains all the required features of an unadulterated Jane Austen first edition in a supreme state of preservation.

The half-titles are present in ALL four volumes, which is exceedingly uncommon as binders of the period were in the habit of removing them. The half-title page is a single leaf that just has the title of the book, not the author's name or imprint details. Many surviving copies no longer have their half-title pages and this feature has become an important issue point among collectors.

The ad leaf, or "Advertisement, by the authoress, to Northanger Abbey" in volume I is still present, which is usually and consistently missing in most volumes.

Interestingly, pages 190 & 191 of Vol.1 are misnumbered, with page 191 preceding page 190 (this corresponds with Gilson, page 81) and in Vol.2 only half of the left-hand parenthesis of the page number is present (Gilson, page 81).

The volumes are bound in half calf (sometimes called three-quarters calf) where the spine and corners of the binding are done in leather. The sides are covered in marbled paper - a typical decorative feature of the era. All four volumes have decorated marbled page edges. Twin morocco labels with gilt titles and tooling to the spines round off the external presentation.

Internally the sequence of leaves (collation) is as follows:

THROUGH GASA LAND AND THE SCENE OF THE PORTUGUESE AGGRESSION