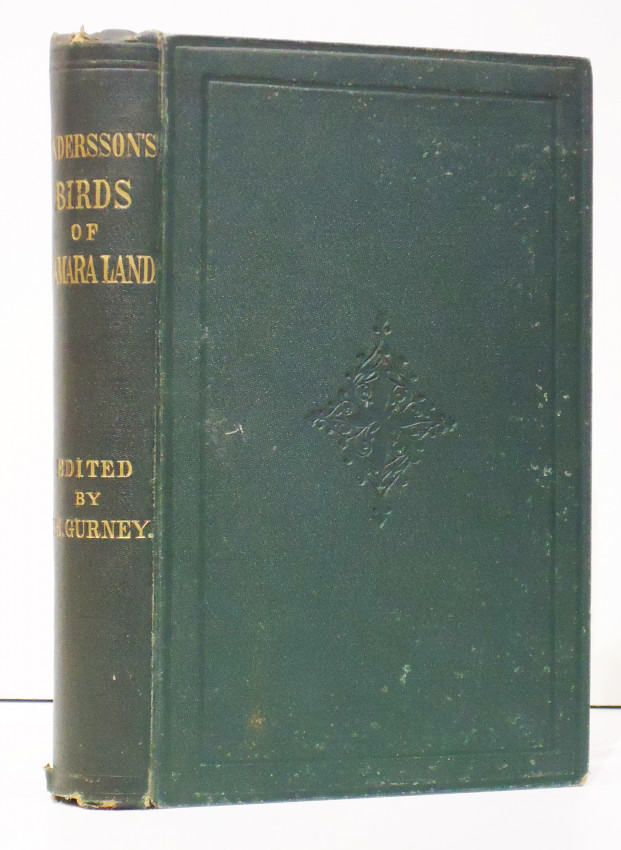 NOTES ON THE BIRDS OF DAMARALAND

And the adjacent territories of South-West Africa.

With some additional notes by the editor,

And an introductory chapter containing a sketch of the author's life.

First edition: 394 pages + 2 pages publisher’s catalogue, map as frontispiece, 4 lithographic plates, foxing throughout, original green cloth stamped blind on the covers, titled gilt on the spine, which has a small chip at the bottom, overall a good copy.

Mendelssohn (Sidney) South African Bibliography volume 1, page 42:. The biographical sketch is taken from a Swedish periodical called the Svenska Jagarforbundets nya Tidskrift, from which it was translated for the editor by Mr. L. Lloyd of Gothenburg, and it gives an interesting synopsis of Andersson's travels in South-Western Africa. Mr. Gurney states that 428 species of birds are enumerated in the volume, all of which have been observed either as residents, migrants, or accidental visitors in that part of South-Western Africa of which Damaraland is the central portion, but which also comprises Ovampo Land to the north, the districts adjacent to Lake Ngami to the north-east, a portion of the Kalahari desert to the south-east, Great and Little Namaqualand to the south, and the coast and adjacent isles of the Atlantic to the west. The work of identification of the species, with notes written on them by the traveller, was carried out with the assistance of eminent ornithologists, while a few well-known specimens, which Mr. Andersson did not meet with, have been included in the book, " for the purpose of making the entire catalogue of the birds known to inhabit these countries, as complete as possible." There is a map " to illustrate Andersson's ornithological notes."

R.F. Kennedy in the preface to 'The Birds of South Africa' painted by Thomas Baines. 'On returning from an expedition to the Victoria Falls with James Chapman, in 1862, Thomas Baines stayed at the home of Charles John Andersson at Otjimbingwe, South-West Africa. Andersson was contemplating writing a bird book to be called 'Avi-fauna of South-West Africa' and invited Baines to assist in illustrating the proposed work. Baines accepted the commission and remained with Andersson from August 1863 to October 1864, painting from the many sketches he had made and from bird-skins collected on his recent expedition. Andersson died before he could complete his magnum-opus on the birdlife of South-West Africa and it was only some years later that his notes were edited and published posthumously by the celebrated British ornithologist, John Henry Gurney. Baines' illustrations were not included in the new work no doubt due the high cost of reproducing the many coloured and tinted plates. It was estimated that more than £4000 would be required - a considerable sum at that time.'