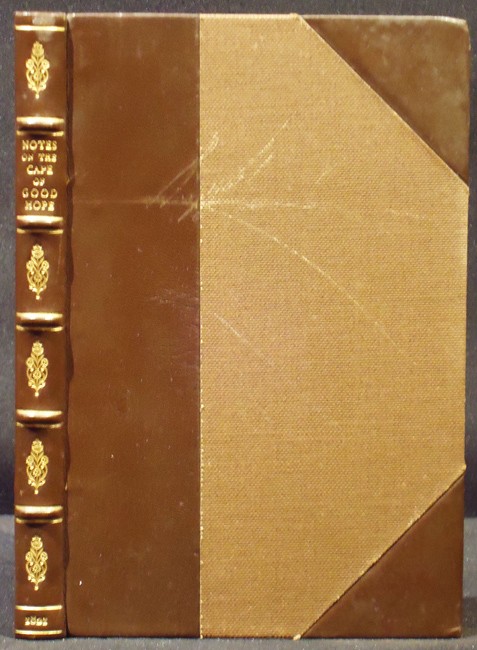 NOTES ON THE CAPE OF GOOD HOPE

Made during an excursion in that colony in the year 1820.
207 pages, half brown morocco titled and decorated gilt on the spine, brown cloth sides, top edge gilt, bookplate on the front paste-down endpaper and a corresponding small stamp below the date on the title page, a very good copy.

Mendelssohn (S.) South African Bibliography, 1.290. ‘The anonymous author evidently did not remain long in the Cape, but he gives an interesting account of the state of the country at the time of his visit. He remarks on the opposition of the 'Dutch Boers' to the settlement of the Cape by Europeans, and observes, 'With still greater animosity and alarm do they contemplate the extensive plan of colonisation now about to be carried out by the British Government.' Much is related concerning the habits of the Dutch, whose manners, it is stated, 'are prepossessing to travellers', although in other respects their habits are severely criticised. Some parts of the country are recommended to settlers who possess substantial sums of money with which to commence farming, and the Knysna district, in particular is well spoken of for this purpose.’

Mendelssohn, writing in 1910, mentions the ‘anonymous author.’ Alfred Gordon-Brown, in Africana Notes & News, volume I, Number I, December 1943, describes how he was able to identify the author as Edward Blount. He continues, ‘Though Theal said that the book “was not of any particular value,” it has considerable interest for its description of social life at the Cape and the early days of the 1820 settlers. It contains a chapter on “Hints to Emigrants,” and, in fact, belongs to that interesting group of books prepared to take advantage of the market created by public interest in the 1820 Settler movement.’