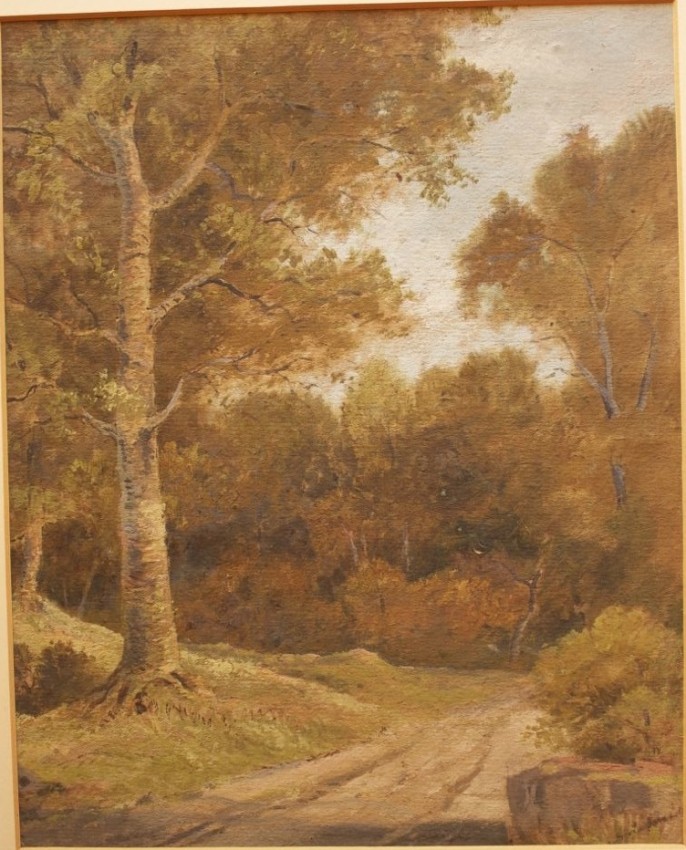 The artwork is signed by the artist at the bottom right-hand corner. 24 x 30cm in oil paint on paper (card) with a laid down matt board mount surround. There is a later ink inscription, dated Sept. 1902, on the back of the artwork describing it as follows:

This is a class of subject seldom undertaken except for the professional artist, and the treatment is very successful, uniting great solidity with lightness of texture in a manner suggestive of the work of (Meindert) Hobemma. It is a good example also of the effect produced by the use of oil paint upon absorbent paper, an effect about midway between that of oils on canvas and that of water-colour. The light in the foreground emphasizes the depth of the forest behind.

In the Lantern Magazine of November 1977 (page 64) there is a picture of a work that De Smidt submitted in April 1902 to a sketching club in England titled Azure and Argent - a Rustic Cottage. The critical inscription and date at the back of this painting indicate that it may well have been another work that De Smidt submitted to the same sketching club a few months later.

'Abraham de Smidt, born in Cape Town, educated at SACS, became a government surveyor at the age of nineteen and in 1872, assumed office of Surveyor-General succeeding Charles Davison Bell, also an artist of note. De Smidt travelled to almost every part of the Colony in the course of his duties, affording him a rare opportunity to record many scenes encountered on these journeys. In his youth he was a pupil of T. W. Bowler, and Bowler's influence can be seen in some of his works but De Smidt soon proved himself a gifted landscape painter who in later life became a collector and art connoisseur. In 1871 he became a foundation member and Trustee of the South African Fine Arts Association. T.B. Bayley named De Smidt a Trustee of his will and through his influence, Bayley's valuable paintings, bequeathed to the SAFAA eventually became the nucleus of the South African National Gallery Collection. De Smidt eventually lost his heart to Europe and after several 'painting holidays' there retired to the United Kingdom where he died in Brighton in 1908. He is represented in the Library of Parliament, the Fehr Collection, and the National Gallery in Cape Town, as well as the Africana Museum, Johannesburg and in many private collections here and overseas.' - Ref. Marjorie Bull's thesis and book, Abraham de Smidt - Artist and Surveyor-General of the Cape of Good Hope.