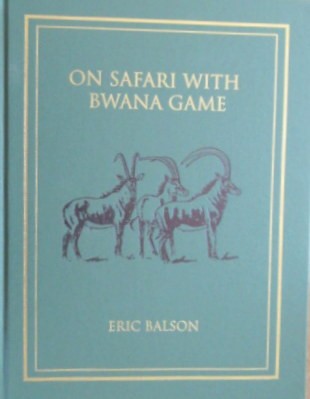 As a PH, Eric Balson, guided some of the most famous people on earth on their East African safaris- Prince Bernhard of the Netherlands, Marshall Tito of Yugoslavia, and famous wildlife artists Guy Coheleach - and their hunting adventures are all told in this book.

On one safari, Balson and Prince Bernhard were charged five times in four days by a leopard, buffalo, crocodile, hippo, and the same croc again! In his youth, Balson had the extraordinary job of catching poisonous snakes for a living; as an adult he dispatched man-eating lions that were thought to be under a spell of witchcraft by the evil "lion-men of Singida," and on other adventures he goes after hyena men and hunts with a Hanoverian hound named Arrus. Balson devotes a special section of the book to the hundred-plus elephants he hunted, some with success and others without, and he recounts the story of the biggest tusker he ever saw in the Selous Reserve - which his client refused to shoot!

As a game warden, Balson was assigned to deal with problem animals and poachers alike and was at one time responsible for an area of 100000 square miles. Artwork by Mike Ghani, and foreword by Derek Evans.

Green Boards with gilt outline and blocking to upper board, and gilt lettering to spine titles. 210 pages, colour and b&w photos. Signed and numbered 510 of 1000 copies. With Slipcase. FINE.