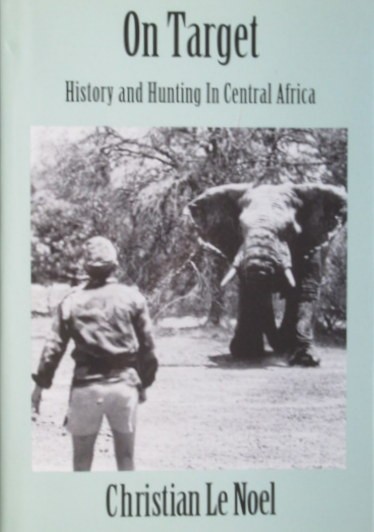 History and Hunting in Central Africa

Noted elephant hunters have made areas such as Karamojo, Oubangui-Chari, and the Aouk River triangle well known among English language readers. But no one has ever produced a book on the history and hunting in French Central Africa- until now. Long time hunter, well known French writer, and popular professional hunter Christian Le Noel has made a study not only of the game animals of Central Africa but of the history of hunting throughout the former French Colonies.

On Target: History & Hunting is exactly what the name implies. It is rich in event and incident. It shows how political and sporting interests combined, conflicted, cooperated and how a large cast of characters plied the game fields for ivory, bongo, dwarf buffalo, giant eland, maneating and other lions, etc. The great river systems of Central Africa required that hunters spend much time in the forest galleries (known as bakos) and/or along the river systems where for months on end they sought only those magical 100-pounders. The hunting was hot and hard. The hunters had to be hardy and full of heart. For it often took everything the body could give.

Unlike the English or German colonies, the terrain in French Central Africa, was and still is, much less penetrable, less prone to easy transportation system construction and far less populated with amenable natives. Explorers like Henry Stanley and Richard Burton had more trouble in these areas than any other. Le Noel traces the history of each game area and shows how both hunter and native influenced the movement of game.

A MAN CALLED LION (Signed by the author)