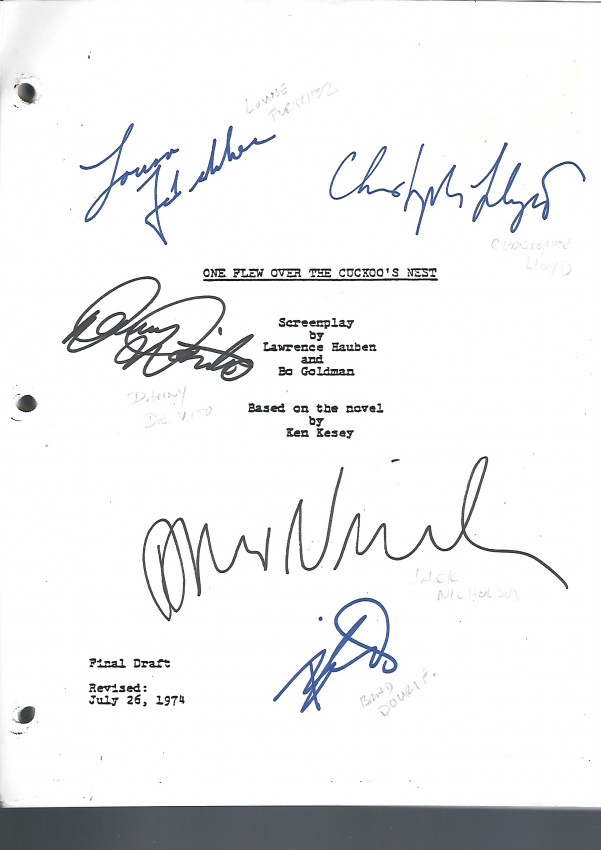 One Flew Over The Cuckoo's Nest Final Film Script (Multi-Signed)

Exceptionally signed on the title page by Jack Nicholson

One Flew Over the Cuckoo's Nest is a 1975 American drama film directed by Miloš Forman, based on the 1962 novel One Flew Over the Cuckoo's Nest by Ken Kesey. The film stars Jack Nicholson as Randle McMurphy, a new patient at a mental institution, and features a supporting cast of Louise Fletcher, William Redfield, Will Sampson, Sydney Lassick, Brad Dourif, Danny DeVito and Christopher Lloyd in his film debut. Filming began in January 1975 and lasted three months, taking place on location in Salem, Oregon, and the surrounding area, as well as on the Oregon coast. The producers decided to shoot the film in the Oregon State Hospital, an actual mental hospital, as this was also the setting of the novel. Considered by many to be one of the greatest films ever made, One Flew Over the Cuckoo's Nest is No. 33 on the American Film Institute's 100 Years... 100 Movies list. The film was the second to win all five major Academy Awards (Best Picture, Actor in Lead Role, Actress in Lead Role, Director and Screenplay) following It Happened One Night in 1934, an accomplishment not repeated until 1991 with The Silence of the Lambs. It also won numerous Golden Globe and BAFTA Awards. In 1993, the film was deemed "culturally, historically, or aesthetically significant" by the United States Library of Congress, and selected for preservation in the National Film Registry.