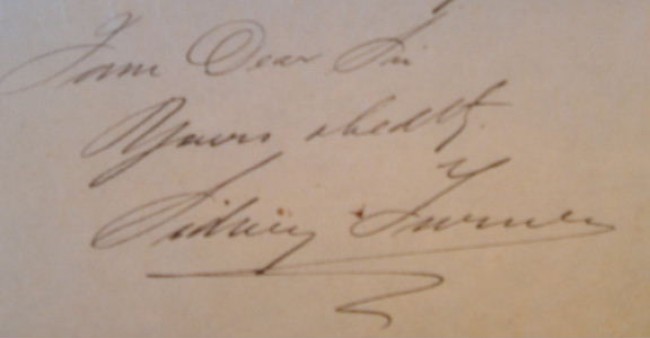 Email or share
A four page autograph letter, signed by Sydney Turner, written in black ink on A4 paper. Addressed to Councilor Hitchins Esq, MLA, written from 430 Point Road, dated 18/7/[18]94. Headed \"Port Grosvenor,\" it begins \"As promised I now send you a short narrative of how I came to open that port on the Pondo Coast and the circumstances which led up to the Granting of a Concession to me for Loading and Shipping and opening up any Ports and Rivers, on that Coast that I might think fit, which Concession was granted to me by the late Paramount Chief Umquikela, Father of the present Chief Sigcau.\" Turner goes on to give brief autobiographical details concerning his stay in Natal & Pondoland from 1865 to the 1880s. He was granted a concession to open ports along the Pondo Coast in 1885. He opened a port at Port Grosvenor and began doing a lucrative trade in opposition to Port St. Johns. However, the Cape Government put a stop to his ambitious project, fearing loss of customs revenue and overtures by German traders to Mqikela. Within five or six months of the opening of the port, the British Government claimed Pondoland as a protectorate and declared Tutrner\'s concession invalid under tribal law. The rest of the letter deals with much of the history & politics of the area during this period. The letter was written to support Turner\'s claims to the Concession. In a margin note Turner talks of documents enclosed within the letter. Thus ended a brief but interesting bit of Natal coastal & shipping history. The story of Sydney Turner is told in the book \"Portrait of a pioneer: the letters of Sidney Turner from South Africa, 1864-1901\" edited by Daphne Child, published by Macmillan South Africa, Johannesburg, 1980. See pages 104 - 115. The four pages have been pinned top left, are slightly torn along a couple of folds & paper is lightly browned & foxed. Together with this letter is a copy of the book on the Turner letters described above.