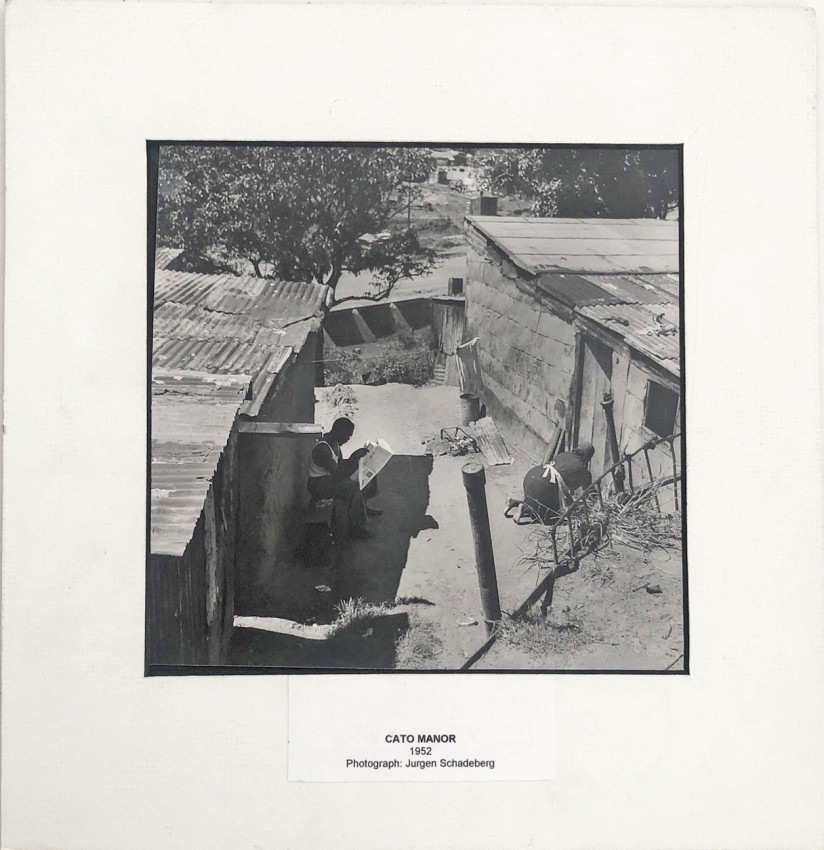 ORIGINAL JURGEN SCHADEBERG PHOTOGRAPH - CATO MANOR 1952 - PLUS BOOK 'THE WAY I SEE IT'.

An original Jurgen Schadeberg photograph entitle 'CATO MANOR, 1952' on a label laid down on the mounting board and rubber stamped 'Copyright Jurgen Schadeberg' on the reverse of the image. Unsigned. Unframed. Crudely mounted on the verso with tape (see image). The photo  measures 18.5 x 18.5cms. With the mount it measures circa 29cms. square. The image itself is in good conditon. Early original Schadeberg images are uncommon. Included in this book is a mint copy of his 2017 autobiography, 'The Way I See It', Picador Africa. 8vo. 467pp. Glossy pictorial wraps.

Jürgen Schadeberg, whose career spans more than 65 years, has been called the father of South  African photography. Schadeberg emigrated to South Africa from Berlin in 1950 at age 19. There, he became chief photographer, picture editor, and art director at Drum Magazine. During the 1950s, he documented pivotal moments in the struggle against Apartheid. He photographed key political figures including Nelson Mandela, Dr. Moroka, Walter Sisulu, and Yusuf Dadoo as well as jazz and literary stars Dolly Rathebe, Miriam Makeba, Hugh Masekela, Kippie Moeketsi, and many others.

Schadeberg left South Africa for London in 1964. From then until his return in 1985, he served as a freelance photojournalist for leading publications in Europe and America; taught at the New School in New York, the Central School of Art & Design in London, and the Hoch Kunst School in Hamburg; and curated several exhibitions, including "The Quality of Life" at the New National Theatre Complex in London.

His work has been exhibited widely, including in a major retrospective at the South African National Gallery in Cape Town in 1996. In 2007, Schadeberg was awarded the Officer’s Verdienst Kreuz First Class by the German President. In 2014 he was the recipient of the Cornell Capa Lifetime Achievement Award. He was the author of many books featuring his photography and in in 2017 he published his autobiography 'The Way I See It', a mint copy of which is included in this lot.

His work is held in the collections of the UK Arts Council, National Portrait Gallery,  Tate and Victoria and Albert Museum in London, as well as many other galleries and museums throughout the world.