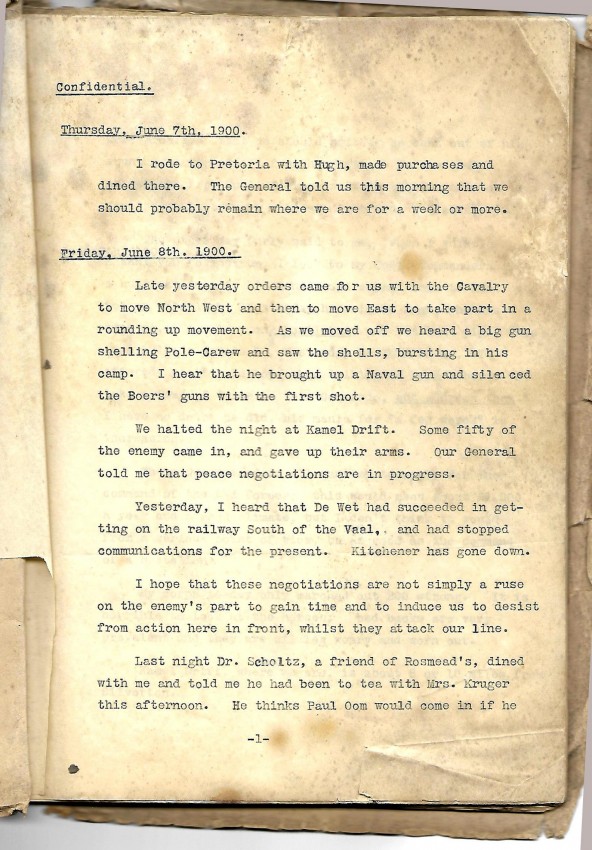 This is an original 61pp. typescript military diary titled on an incomplete partially excised title page "Private Diary of Colonel T.D. Pilcher. Volume C. June 7th. 1900 to August 31st. 1900." and labelled "Confidential". Over 12,000 words comprising detailed descriptions of military activities and battles. Typed on one side of each leaf with some autograph additions and corrections. 4 pages have original drawings/diagrams of military operations on the opposite blank pages. Some very brief and random extracts which are inadequate to convey the range and detail of the contents:

June 8th. 1900. Yesterday I heard that De Wet had succeeded in getting on the railway South of the Vaal, and had stopped communications for the present. Kitchener has gone down. / I hope that these negotiations are not simply a ruse on the enemy's part to gain time.........

July 6th. 1900. I advanced at 6am. along the range towards Witpoort and by 9am. was in touch with the enemy. We had a good deal of skirmishing and they tried to cut off a party of my New Zealanders who, according to their custom. were rather too pushing , and had it not been for a flanking movement I made with the Queenslanders, would have, I think, been cut off. As it was we bagged a couple of Boers, and the New Zealanders only had one man hit.

July 29th. 1900. We marched to Christine Hill, and encamped near the house of Mr. Marks, the Jew millionaire.

July 30th. We marched through Pretoria, where Lord Roberts saw us go by, and bivouacked through the poort near Daspoort. The camping ground is a very smelly one, and there are many dead horses about. We received the news of the surrender of General Prinsloo and 5,000  men at Fouriesburg.

Saturday 18th. August. We were just getting into camp 3pm. when a helio from Commando Poort told us that Lord Roberts desired us to push on at all costs. and delay De Wet who was encamped to the West of Crocodile Drift.

And so on - I will happily provide more images if required.

The diary is cheaply pin bound into black faux leather wraps which are extremely tatty and are starting to detach. Two thirds of the title page has been excised. There is some staining of several pages but generally the typed leaves are in decent condition.

Major-General Thomas David Pilcher was a British Army officer, who commanded a mounted infantry unit in the Second Boer War and the 17th. Division during the First World War, before being removed in disgrace during the Battle of the Somme. He wrote and published several books mainly of a military nature, including "Some Lessons from the Boer War, 1899 - 1902" in 1903. Volume C on offer is obviously one of several volumes of his Boer War Diary which appears to be unpublished.