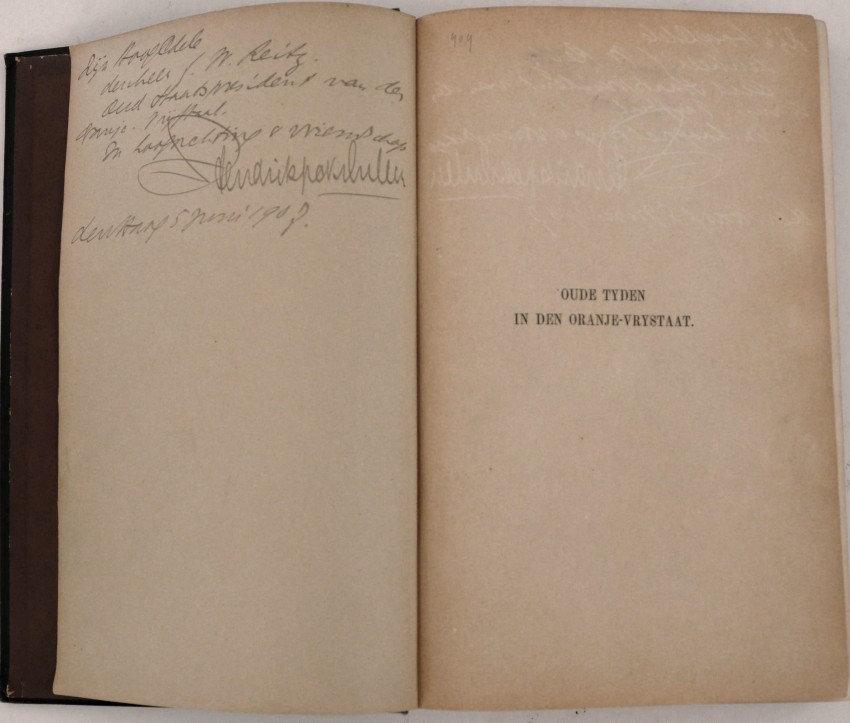 A study of the Orange Free State from its origins until 1896. In the scarce original bevelled dark green gilt embossed cloth covered boards - presumably a deluxe binding, as most of the copies I have located are in softcover. This copy is inscribed on the verso of the front free endpaper to F.W. Reitz as follows: "Sij Hoogedele/den heer F.W. Reitz/ouds Staatspresident van der/Oranje-Vrystaat/in hoofnechting (?) en vriendskap/HendrikPNMuller". The printed dedication of the book, on a preliminary blank, reads: "Aan/FRANCIS WILLIAM REITZ,/van 1889 tot 189 Staatspresident van den Oranje-Vrystaat, den/edelen, reminnelijken, eenvoudigen,vaderlander, in zelfopoffering/en onbaatzuchtigheid onovertroffen, worden deze beschiedbladen/door den schriver opgedragen en de grootste hoochagting en in /getroue vriendschap,/ 's Gravenhage, April 1907." This copy is thus the ultimate association copy - the dedication copy.

The binding is a little worn and rubbed with an abrasion of the cloth over the rear board (see image). The front inner hinge is starting to crack but the book is tight and otherwise unmarked. There is some foxing of the half title page. A very good copy.

Francis William Reitz, Jr. (Swellendam, 5 October 1844 Cape Town, 27 March 1934) was a South African lawyer, politician, statesman, publicist, and poet who was a member of parliament of the Cape Colony, Chief Justice and fifth State President of the Orange Free State, State Secretary of the South African Republic at the time of the Second Boer War, and the first president of the Senate of the Union of South Africa.

The author, Hendrik Pieter Nicolaas "Henk" Muller, (2 April 1859 - 11 August 1941), was a Dutch businessman, diplomat, explorer, publicist, and philanthropist. He was a prolific writer. Over the course of his life he published well over two hundred articles, brochures, and books about his travels through the world, about South Africa and the Boers, and about Dutch foreign policy and diplomacy, apart from a range of other subjects. In 1882/'83 Muller travelled to East Africa and visited all the trading posts and establishments of his trading company, changing business practices. At the end of his trip he made an extensive tour of South Africa, visiting Natal, Zululand, Transvaal, the Orange Free State, and the Cape Colony.

A unique copy of this interesting book.

Uganda The Pearl of Africa