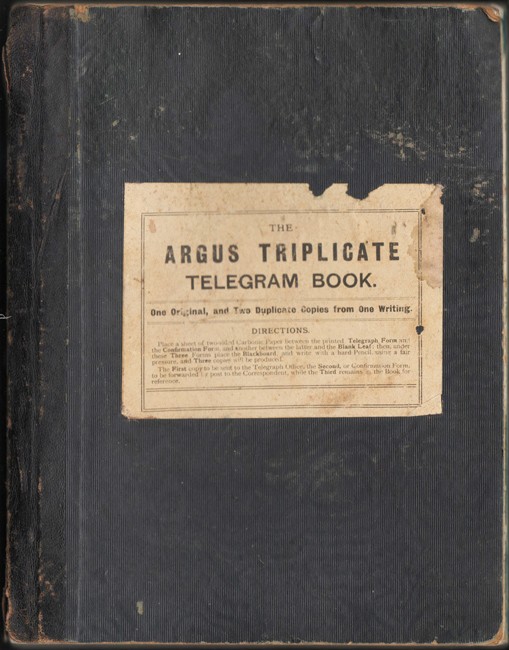 Carbon  duplicate book (similar binding but larger format than the note books)  containing 37 Scouts Reports, Standerton, concerning sightings of Boers and  Commandos. ‘6/2/02, Janse Van Vuuren with about 30 to 40 men still reported in  the vicinity of Kaalspruit….’

Also  included are Schweizer’s discharge certificate:
‘This  is to certify the Mr E.E. Schweizer served in the Field Intelligence Dept. as  agent from 21st April 1900 to 31st July 1902, and was  discharged upon closing the Dept.’ Stamped D.M.I. 8–Jul–1092. Army Headquarters.

A  letter of commendation dated 29 June 02, at Standerton from R. Clements (?),  Maj.Gen. Commanding, Standerton Dist., reads, ‘Guide E.E. Schweizer has been  employed by the Field Intelligence Department for 15 months under my command.  He has proved himself to be a daring and useful scout, and seems a reliable and  steady man. His knowledge of the Dutch and native languages should make him  useful in any position in the department of the Secretary for native affairs.’

‘General  Lord Kitchener, who became C-in-C when Roberts returned home, appointed David  Henderson, now a lieut-colonel, Director of Military Intelligence for the  counter-insurgency guerrilla phase from February 1901 until May 1902. He  established precise requirements for IO's at different levels, including a  standardised format for regular reports and that information should not only go  up the chain of command but also down to subordinate units. South Africa was  divided into four main areas of Cape Colony, Orange River Colony, Transvaal and  Western District for intelligence purposes with an IO responsible for each  district. Daily reports were telegraphed to the DMI with a weekly summary sent  every Sunday evening. Duties included hiring agents, scouts and interpreters,  distribution of maps and ciphers; censorship, collection on information of  routes, stores and ammunition, Boer casualties and suchlike. Accounts were to  be kept of all expenditure including that spent on clandestine operations.’
http://www.victorianmilitarysociety.org.uk/reserach/2012-09-09-11-20-22/archive/64-the-second-anglo-boer-war-military-intelligence

My Experiences of the Boer War

ON THE VELDT (Signed by the author and his assistant)