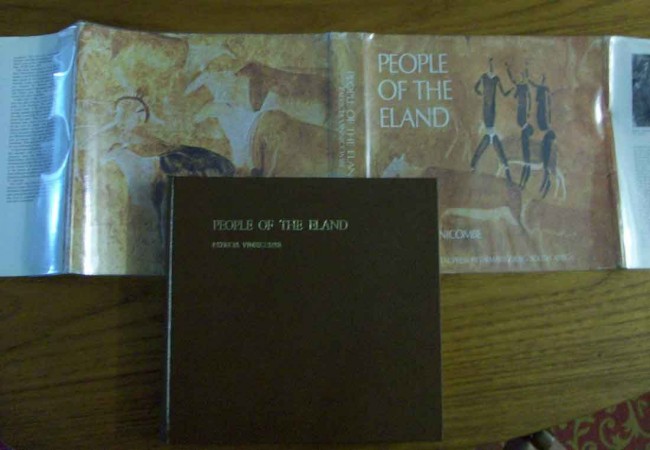 PEOPLE OF THE ELAND- Rock Paintings of the Drakensberg Bushmen as a reflection of their life and thought.

This book, illustrated by over 200 of Miss Vinnicombe's tracings and the photographs, is the definitive record of the Bushman culture in the Drakensberg and its environs. It also covers the period of contact between the Bushmen and the successive waves of immigrants, both Black and White, who, from time to time, moved into their homeland.

Unlike other books, however, this one gives the story from, as it were, the viewpoint of the Bushman. The author, by a careful study of the official records of reprisal expeditions against the Bushmen, was able to establish the probable escape routes they used.Then,in the field, she explored these routes in great detail. In several cases she found rock paintings showing parties of mounted Europeans which in number and apparel, agree with official records of the bumber of farmers and of troopers who took part in the espeditions. These paintings thus appear to be true eyewitness accounts.

In the second and larger part of the book she discusses what is recorded in the literature about the Bushmen of the Drakensberg, tells what is known of their beliefs and attitudes to life and relates these to the content of the paintings developing in the process an interesting theory of associations and avoidances supported by a statistical analysis of the subject matter of the paintings.