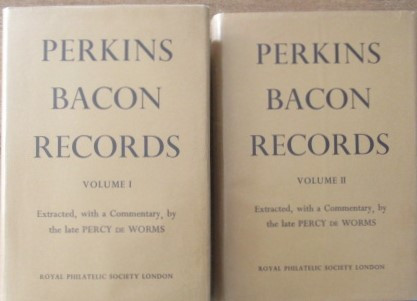 Percy De Worms (Extracted, with a Commentary by)

Perkin Bacon Records. Extracted with a Commentary by the late Percy De Worms.

With a Foreword by Sir John Wilson. Edited with an Introduction by John Easton and Arnold Strange

Percy de Worms was a person of meticulous accuracy, and he very much disliked guesses or inferences which could not be proved. He felt that as editor of the Records he would as far as possible leave them to speak for themselves, and allow students of the day and of the future to draw their own inferences and attempt to use the Records to support them.

No reader of this work must, in consequence, think that all the problems of Perkins, Bacon's printings have been solved, nor must he think that the unsolved problems were not apparent to the author.

Nobody who was in the habit of frequenting the Society's headquarters over a period of years, and who has ever inspected the Letter-books and other documents available, could fail to be struck with the monumental task of deciphering and arranging them. Possibly nobody but de Worms would have had the courage to attempt it, and certainly nobody without his great enthusiasm and patience could ever have produced the material in its present state of completion. He must have often spent hours in attempting to decipher a letter largely destroyed, even though he might be satisfied that it did not contain anything of primary importance. His industry is his monument.