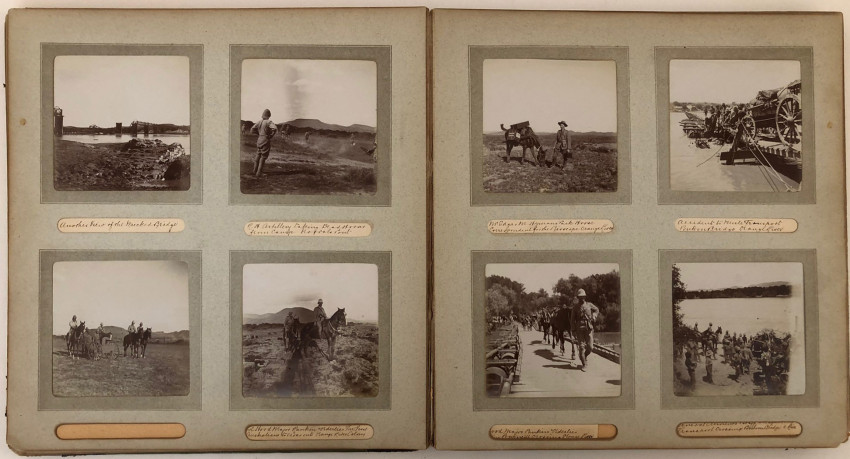 This is a unique album personally owned by the photographer, Edgar Hyman and acquired by descent from his family. It comprises 124 fine 80mm. square glossy sepia photographs housed in a custom album, four per page, with all but five of the photos with neatly hand written captions. The photos and captions have not been laid down, but rather loosely enclosed in the compartments that the album provides, using paper on a board backing. Some of these have become loose and hence the loss of a few of the captions. The photographs are of scenes of the South African War (1899-1902) captured by Hyman and possibly his colleague Joseph Rosenthal whilst serving as official Cinema War Correspondents in the employ of the Warwick Trading Company. Some random examples of the photographs in this album are:

- The Funeral of Colonel Gough, Bloemfontein

- Edgar Hyman outside his tent

- View of the wreck of the Norval’s pont bridge

The photos have not been checked against well known Boer War photographers, but it is likely that they are to to a large extent and possibly entirely unpublished.

The album measures 26x24cms. and is bound in half leather and buckram. It contains 16 leaves of board and paper. It is only in fair condition. The spine is missing and the other leather components are rubbed. Some of the pages have become loose at the hinges. However the photos themselves are all in excellent condition and are totally unfaded.

Edgar Hyman (1871 – 1936) was born in England and came out to Johannesburg in 1894 and, as a partner in Alexander and Hyman, leased the Empire Music Hall. In partnership with Joseph Rosenthal (1896), he achieved great success, showing the first moving pictures in the country. Greatly impressed by this novelty, in 1897 Hyman acquired a camera from Charles Urban (through his brother Sydney, who acted as his British agent). Hyman was undoubtedly making films by the following year, amongst which were street scenes of Johannesburg and he may also have filmed on the SS Scot during a voyage from Britain to South Africa. In September 1898 he claimed to have filmed President Kruger leaving his house in Pretoria en route to the Raadzaal, although Joseph Rosenthal, in an interview, stated that this film was his own work. What is certain is that in January 1899 Hyman, together with the Empire's musical director, Dave Foote, gave a show of this and other films to the President himself and his guests in the Residency, Pretoria, and Kruger was said to be most impressed, especially with the film of himself. Later that year, with the Boer War about to flare up, Hyman was on his way back to South Africa after one of his periodic visits to London. Arriving in Johannesburg he found the Empire Theatre closing in preparation for the coming hostilities, and was forced to decamp with the company to Cape Town, where he found another hall in which to give shows. Thus Hyman was in the right place to witness the first British and colonial troops arriving in South Africa.  In November he filmed Sir Redvers Buller in Cape Town, and over the next couple of months recorded a variety of British and colonial regiments disembarking or marching through the city. Hyman himself followed the troops to the western front some time in December, he seems then to have joined up with Joseph Rosenthal at the Orange River, and ended up filming the raising of the British flag over Pretoria in June of 1900. After the war, Hyman continued in the music hall business, and in 1912 formed a company running a chain of theatres and distributing films in South Africa, but the following year this company went into liquidation. It was a sad reverse for the man who had helped bring the cinema to South Africa. During the Anglo Boer War, he made films of the fighting, which were screened after the war ended in 1902.

A special item and I would be happy to answer any questions from interested parties.