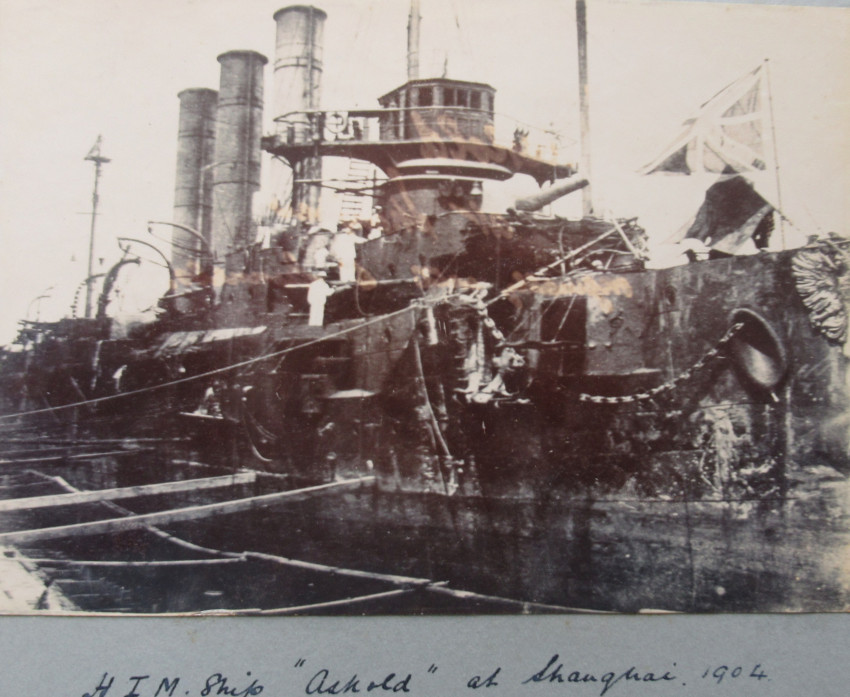 Featured are WEI-HAI-WEI at sea & harbour. Russian Fleet damaged, sunk and or captured. Shipmates and Sailors plus some sporting items- Hong Kong Races, Tug of War at Shanghai.

5- Photograph of H.M.I.S KOREETZ, Russian Transport sunk at CHEMULPO . Part of the Russia Fleet.Took part in the Boxer Rebellion with 9 KIA and 20 wounded. 14 X 10cm.

7- Detailed photograph of H.I.M.S TSAREVITCH at Tsingtau pre-dreadnought of the Imperial Russian Navy, launched 1901 based at Port Arthur, torpedoed at the battle of the YELLOW SEA, interred in Tsingtau. Flagship of Rear Admiral Vitgeft, KIA. 14 X 10cm

8- Photograph of badly damaged Russian Destroyer "RESHITELNYI" captured at Chefoo 10th August 1904. Renamed AKATSUKI in 1905, she participated in the Battle of TSUSHIMA where she collided with a Japanese torpedo boat which sank, she was renamed YAMABIKO in 1906 and decomissioned in 1917. 14 X 10cm.

9- H.M.I.S ASKOLD, Cruiser interned in Shanghai,1904, ship of the Russian Pacific Fleet. This vessell had five thin funnels which gave it a unique silhouette for any vessel in the Imperial Russsian Navy. This led British sailors to nickname her "packet of woodbines" after the thin cigarettes popular at the time. 14 X 10cm

11- 3x Photographs of H.M.S CENTURION at Shanghai during the Boxer Rebellion, flagship of the China Station Fleet. Present at the TAKU forts battle. 11.5 X 9cm.

Each of the photographs is annotated with inked detail, the spine to the album has been reinforced.