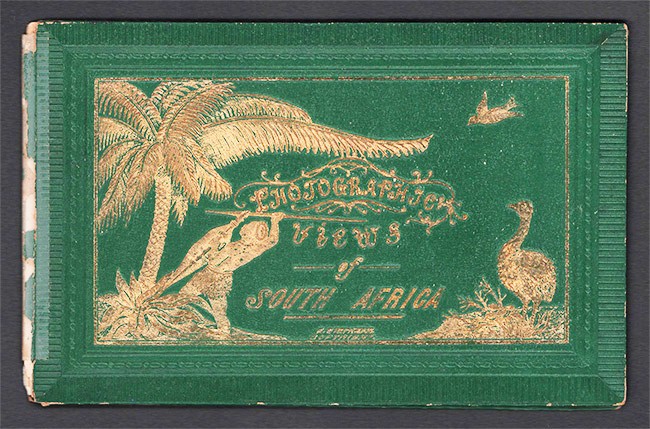 The term leporello refers to printed material folded into an accordion-pleat style. Also sometimes known as a concertina fold, it is a method of parallel folding with the folds alternating between front and back.

Many leporellos are used as a way of telling a story, while others are purely visual. In the Victorian era, leporellos were quite commonly used as travel souvenirs, depicting beautiful, panoramic scenes of the places travellers had just seen. http://www.abebooks.com/blog/index.php/2013/05/16/leporello-and-concertina-books/

Views include St. Georges Street showing buildings of Saul Solomon and Co., Government Printer till 1881; his insolvent business was wound up in 1886.

From A South African Bibliography, volume 5 (The Supplement), page 255. Commercial firms often issued view albums under their own names for publicity. Cape Almanacs list a John Stevens, general dealer at 10 Napier Street from 1877 to 1890's (possibly the publisher of this album?).

My Rod My Comfort by Robert Bruce Lockhart with wood engravings by J. Gaastra.

With Rod and Line in Colorado Waters