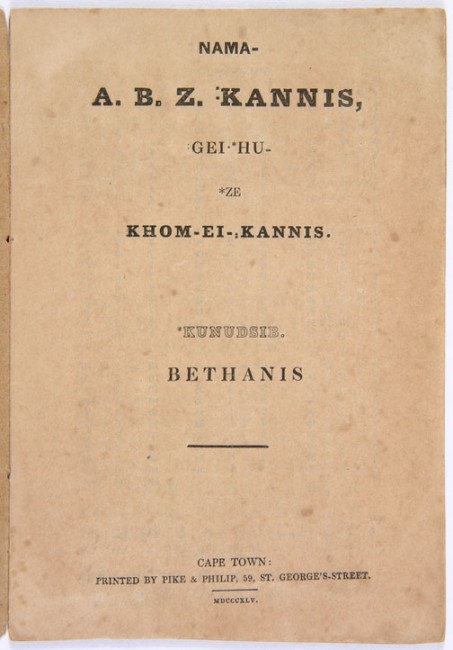 Edition: First (and only) edition

FIRST (and only) edition, comprising the very first language primer for the Nama language (spoken in Namibia) as well as one of the earliest sub-Saharan African primers. The sub-title apparently translates as "Shouting Together and Reading Book". Its author Hans Christian Knudsen (1816-1863), was a Norwegian missionary of the Rhenish (German Lutheran) Missionary Society . "This spelling and reading book includes vocabularies with an English translation, and part of a catechism; viz., the Ten Commandments, part of St. Augustine's creed, the Lord's Prayer, &c."--cf. Grey, Sir G. The library of His Excellency Sir George Grey (London, 1858-62. v. 1, p. 13-14).
OCLC records only 5 additional copies of this title: NYPL, University of Natal Library, Universiteit Leiden, Univ of Cape Town Library, and another in South Africa.
Provenance: with the book label of antiquarian specialist John Lawson (Oxford, UK).

According to Wikipedia, "The Khoekhoe language /ˈkɔɪkɔɪ/, Khoekhoegowab, also known by the ethnic term Nama /ˈnɑːmə/[1] and formerly as Hottentot, is the most widespread of those languages of southern Africa that contain many "click" sounds and have therefore been loosely classified as Khoisan languages. It belongs to the Khoe language family, and is spoken in Namibia, Botswana, and South Africa by three ethnic groups, the Nama, Damara, and Haiǁom.
It appears that the Damara picked up the language from the Nama in Botswana, and that they migrated to Namibia separately from the Nama. The Haiǁom, who had spoken a Juu language, later shifted to Khoekhoe. The name for Nama speakers, Khoekhoen, is from the Nama word khoe "person",with reduplication and the suffix -n to indicate the plural.Georg Friedrich Wreede was the first European to study the language, after arriving in Cape Town in 1659.
Khoekhoe is a national language in Namibia. In Namibia and South Africa, radio programs are broadcast in it. In Namibia, it is used for teaching up to the university level as well as in the administration."