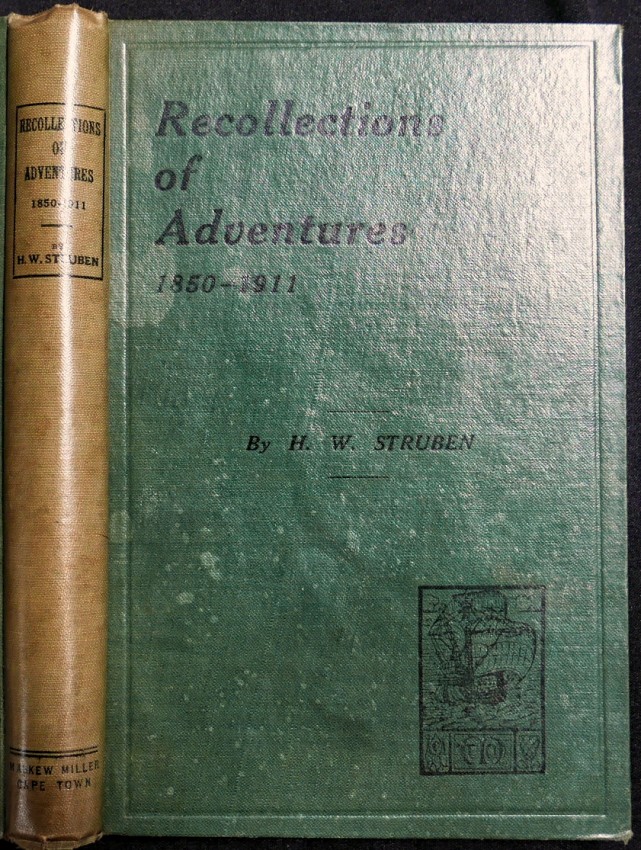 Faded spine. Previous owner's signature to front free EP. Front and rear EPs are heavily toned. Some foxing to first and last few pages. The rest of the book is clean throughout with bindings holding firm. Apart from the foxing mentioned, this rather scarce book written by the early Johannesburg pioneer, Harry Struben and edited by his daughter Edith is in very good condition indeed.

Chapters include The family, Early days in Natal and Pretoria, Pioneers' difficulties of travel, Trekking to the Cape Colony, Big game shooting, Bushveld and other treks, Zoutpansberg, Ivory trading, Boer Voortrekkers and Commandos, Civil wars, British and European Pioneers and visitors to the Transvaal, Earl farming ventures, Native wars and unrest, Discovery of diamond fields and early Kimberly days, Gold discoveries at Lydenberg and much more.

'How was gold discovered in Johannesburg? Many of the pioneers of the South African interior suspected that there was gold here somewhere - it had, after all, been found a few hundred kilometres to the east, in Barberton. Some prospectors spent years buying up land, digging and panning, finding tell-tale yellow traces, but nothing substantial. In 1882, Siegmund Hammerschlag, whose farm Tweefontein lay where Krugersdorp is today, erected the first ore-crushing machinery, a two-stamp battery. The first to strike gold were the Struben brothers, Fred and Harry, who owned parts of the adjoining farms Sterkfontein and Wilgespruit in what is now Roodepoort. They found what looked at first to be the first "payable" seam in 1884, and called their mine Confidence Reef, a name that proclaimed that the long search was over. Alas, even Confidence Reef lasted no more than a year. The Struben family had immigrated to South Africa from Germany around 1840. In 1856, Harry bought his first span of oxen and became a transport rider between Durban and Pretoria. In 1862 he bought a farm in Pretoria, where he settled, with his wife and seven children. Fred also moved to Pretoria, where he worked as an assistant to Harry. Fred Struben discovered gold at the Confidence Reef Mine - but his luck didn't last long. The two brothers joined the rush to Kimberley, when diamonds were discovered there in 1871, but returned shortly afterwards when Fred's health suffered. In 1882 Fred tried his luck again at Barberton in what is today Mpumalanga, where a rich but short-lived gold reef had been discovered. He returned to his brother's farm, which was close to ruin after a hailstorm destroyed his crops. Almost broke, the brothers considered emigrating to New Zealand, but a chance visit changed their minds. Knowing that Fred had a reputation for expertise in geology, neighbouring farmer Louw Geldenhuys arrived to ask for an opinion of the rocks on his farm Wilgespruit, which covered part of what is today the western flank of Johannesburg. Geldenhuys had also been in Barberton, and he believed the rocks on his farm were similar to the gold-bearing rocks he had seen in Barberton. The two men rode over to Wilgespruit and looked at the rocks, and Fred became convinced that the area was indeed gold-bearing. Fred made the astute observation that many of the pebbles appeared water-worn, which indicated that at some point in the distant past, "the whole area must have been submerged", resulting in the accumulation of layers of sediment and "conglomerate beds . . . which might possibly carry gold as in other parts of the world". (Quoted in: Early Johannesburg, It's Buildings and People, by Hannes Meiring, Human & Rousseau, 1985). Soon afterwards, Harry bought the neighbouring farm Sterkfontein, which had been advertised as having "gold-bearing quartz reefs". Fred rolled up his sleeves and got to work. Historian Eric Rosenthal, in his Gold! Gold! Gold! The Johannesburg Gold Rush (MacMillan, 1970), quotes Fred Struben as saying: "In January 1884 I started prospecting on the Sterkfontein farm at the west end of the range. The second day I found a reef showing gold, which assayed on the surface 6 pennyweights, and at 50 feet had improved so that the sum had reached nearly 2 ounces." Fred kept finding "colour" - minute traces of gold - but none that amounted to much. He turned his attention to the neighbouring farm Wilgespruit, the eastern portion of which his brother had bought, and there established the Confidence Reef Mine. The government of the Boer republic, the Zuid-Afrikaansche Republiek, headed by President Paul Kruger, watched these developments with anxiety. On the one hand, Kruger needed the taxes he could raise from gold exploration, and the gold taxes from Barberton were running low. On the other hand, he was wary of a gold rush bringing in thousands of foreign speculators, and of the interest the British might take in his tiny country if payable gold were found. The British had already made one failed attempt to annex the country, in 1877. The Kruger government dithered, caught in a quandary. Kruger visited the area where the Strubens and others were digging, to gauge the strength of opinion. In June 1885 Harry Struben made a presentation to Kruger and members of the Volksraad, or parliament. According to a report in the Dutch newspaper De Volkstem, Harry argued that the government should "foster the mining interests . . . He trusted that the Volksraad would so revise the gold law that proprietary rights would be fully defined, and no excessive duties levied to cripple the mining industry . . ."But already the Struben's find, Confidence Reef, was running dry. The Strubens had not found the main gold reef - that honour went to others who were also on the trail of gold. Yet once again, the Strubens played a role, because it was three of their workmen, inspired by the Strubens, who made the critical discovery. One of Johannesburg's distinctive mine dumps, scattered around the area south of the city what became of the Strubens? The Struben brothers made enough money from their find to enable them to retire not long after the main reef was discovered.Harry, the business brain behind the pair, stayed long enough to be appointed the first president of the Chamber of Mines in 1887. In 1889 he retired to Cape Town, and lived in a suburban mansion until his death, at the age of 75, in 1915. Fred retired to a large estate in Devon in England in 1888. He died at the age of 80 in 1931. The first real gold diggers on the Rand John Davis, a Welshman, discovered gold near Krugersdorp in 1852, but when he showed it to President Andries Pretorius, he was ordered out of the country. A year later Pieter Marais, who had gone to California and Australia in search of gold, discovered alluvial gold in the Jukskei River which runs out of Johannesburg. He was allowed to continue with his search but was threatened with death if he revealed the discovery. He lived because his discoveries ran dry.'