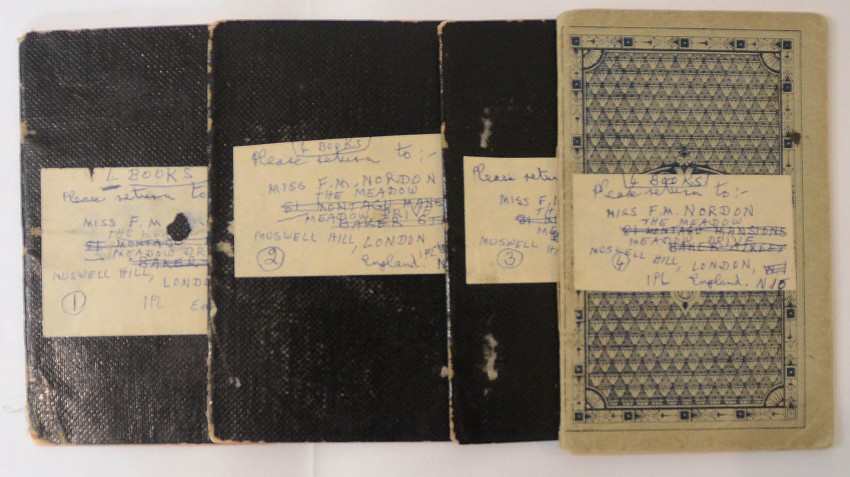 REMARKABLE MANUSCRIPT DIARY OF THE SIEGE OF MAFEKING

A remarkable circa 15 thousand word diary/journal of the Siege and Relief of Mafeking written by a British soldier identified only as "Bob". Contained in 4 small notebooks measuring 16 x 10cms. and comprising 143 closely and neatly written pages in the form of letters to his parents in England.

The first entry is headed "Guard Tent/Hospital Redoubt/Mafeking/24.11.99" and is addressed to "My darling old parents" and starts "I can but guess the extent of the suspense and anxiety you must have undergone as regards the fate of this little town - the place where the war which is to once and for all decide British supremacy in South Africa - started." The last entry/letter is dated "Thursday June 13" after the Relief on 17th. May 1900, and is signed "Fondest love my darlings/from yours as ever/Bob". It is well nigh impossible in a short description to convey the wealth of detail and information contained in these notebooks, but I will quote a very few random extracts to indicate the nature of the diary:

- Meanwhile local defences had been organised & on the Thursday evening (the Boers being just on the border) the whole of the Town guard to the number of 450 were paraded on the Town Market Square with our rifles and our bandoliers & were addressed by Col Baden Powell, the officer commanding here who won laurels in the Matabele war. He said a few nice words of cheer to which we all responded with cheers for the Queen & the Colonel.

- Last Sunday we had an agricultural show here & also a prize for the best "siege baby" ie. born since Oct 13th. It is really wonderful what few lives have been lost here considering that about 100,000lbs. or nearly 50 tons of lead have been hurled into this little place."

- Two days ago one the the Cape Police, by name Elkington & a very nice fellow - had both of his eyes and a piece of his nose knocked out by a piece of a 5 pounder shell. He says he wishes to die..........

- It appears that the grandson of Kruger, a man named Eiloff (sic) had come to help Sneyman (sic) try and attempt to take the town. Also two days ago about 90 Germans, Frenchmen & others came & seemed to have tried to inspire confidence & courage into the average Boer.

- We are hoping that by tomorrow night we may be relieved but have to keep a very sharp lookout tonight. I expect you have some very conflicting reports about this town, my dearest ones, but up to now the old flag still waves aloft

Please see the few images provided. I am happy to provide more information and further images if required. The notebooks are hand numbered and labelled "Please return to Miss F.M. Nordon, MBE. The Meadow, Muswell Hill, London, who according to her note on the inside of the front cover of the first notebook, was given the diary in 1970 after the death of the previous owner, a Mrs. C. Barnard. Miss Nordon was a captain of the Women's Voluntary Reserve (WVR).

I have been unable to identify who Bob, the author of the diary, was. There have been quite a few diaries of the Mafeking Siege identified, some published (notably that of Sol Plaatje) and some unpublished. This one is certainly unpublished and possibly not even known.