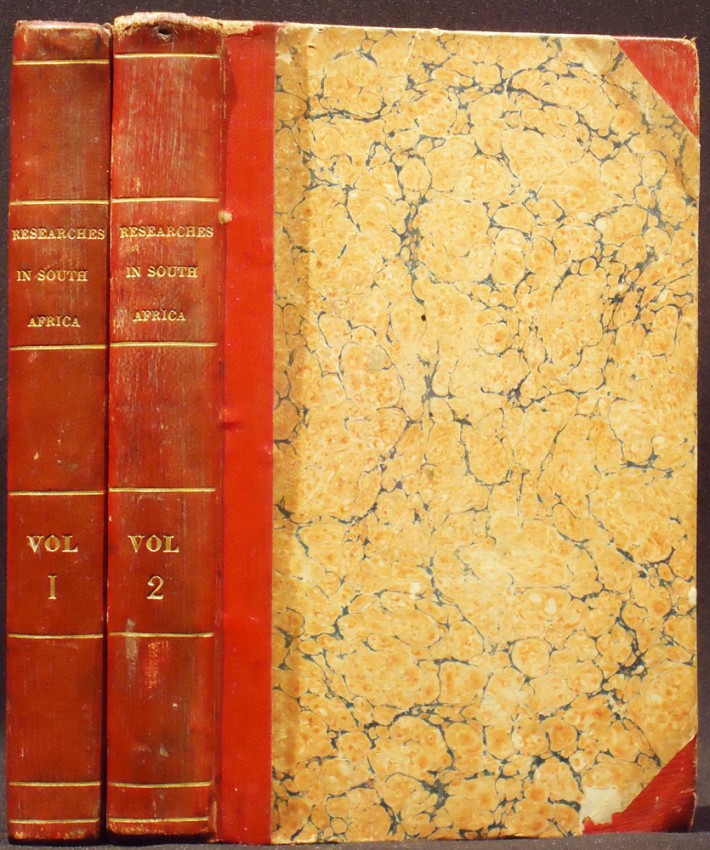 Illustrating the civil, moral, and religious condition of the native tribes: including journals of the author's travels in the interior; together with detailed accounts of the progress of the Christian Missions exhibiting the influence of Christianity in promoting civilization in two volumes.

Two volumes: xxxv + 403 + viii + 450 pages (+ 1 leaf instructions to binder and errata with an advertisement for Thomas Pringles’ Ephemerides on the verso), frontispiece in volume 1 (the village of Bethelsorp) & folding map as frontispiece to volume 2 starting to tear and repaired at the folds, 1 plan, half red morocco, marbled paper boards slightly scuffed and worn, a good set.

Mendelssohn (Sidney) South African Bibliography, Volume 2 page 160 -161: Few books on South African matters have been the subject of such fierce denunciation and bitter criticisms as these volumes. The author proceeded to South Africa in the service of the London Missionary Society in 1819, and soon became a most drastic censor of the methods pursued towards the natives by the colonists, and the policy of the colonial Government with regard to native affairs. His strictures were so severe that the attention of the British Government was directed to the matter, and when, in 1826, Dr. Philip visited England, his views received the careful attention of Lord Bathurst. When the " Researches in South Africa " were published a large amount of public indignation was aroused, and the subject was brought before the Houses of Parliament, considerable changes in the administration of native affairs in South Africa being eventually brought about. Generally speaking, the work was condemned in the Cape Colony as a biassed and partial production, and " highly overdrawn statement,' from which many explanatory particulars known to the author were omitted." The reflections on the officials of the Cape Colony were bitterly resented, and one of the accused Mr. Mackay, Landrost of Somerset” brought an action against Dr. Philip for libel. Judgment was given against the author, who had to pay £200 in damages, together with costs amounting to about Â£900, the Chief Justice, Sir John Wylde, " characterising the statement concerning Mr. Mackay as a ' false and malicious libel,' the two other judges concurring in his condemnation " (Theal, " History of South Africa, 1795-1834 "). The missionary party in London, however, and a considerable section of the public, regarded Dr. Philip as a martyr to colonial prejudice, and public meetings were held to defray the cost of the case. Despite the extreme views held by Dr. Philip, his charges against the Dutch colonists were upheld by a whole phalanx of writers, from the times of Percival and Barrow to those of Livingstone and even later authors; the instances of exaggeration i and inaccuracy quoted against him do not in any very material degree affect the accusations as a whole, although possibly matters may have been omitted which might, to a certain extent, have condoned the brutalities which were stated to have taken place. The volumes afford considerable information respecting the natives and colonists in the first quarter of the nineteenth century, together with details respecting missionary work in South Africa at this period.

Hints on Emigration to the Cape of Good Hope.

Sketches of Some of the Various Classes and Tribes Inhabiting the Colony of the Cape of Good Hope&hellip;

Antic Memories: Highveld and Bushveld - In War and Peace (Inscribed by Author)

"Nyaka" The Story of Dr. Livingstone