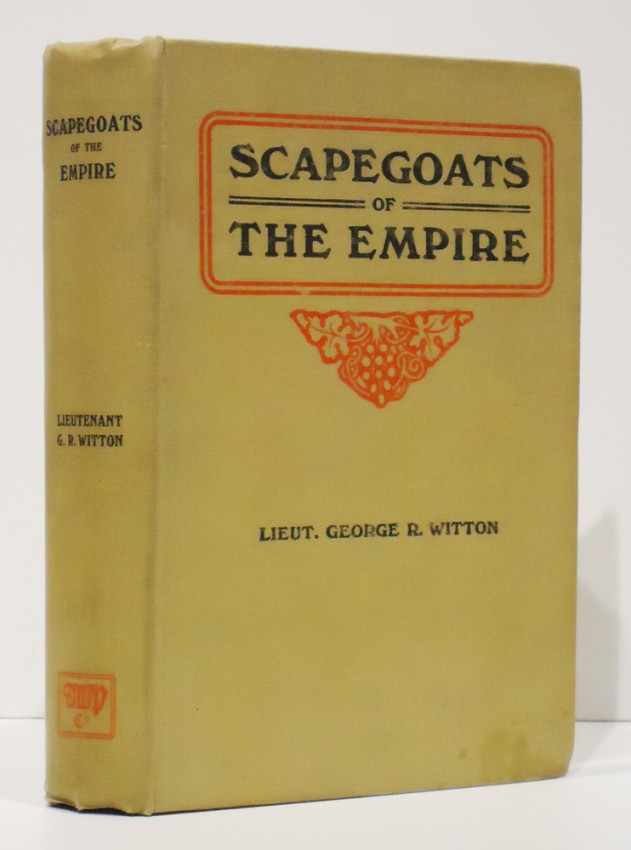 SCAPEGOATS OF THE EMPIRE

Second edition: 240 pages, frontispiece of Witton leaving Portland Prison, 7 plates, original beige cloth, a very good copy. 'The court of inquiry - the British court-martial convened in Pretoria to try Australian officers of the Bushveldt Carbineers for shooting Boer prisoners. The trial and its outcome - the execution of Harry Morant, Peter Hancock and the sentencing of George Witton to life imprisonment - has intrigued many writers. Was this true military justice or were the defendants indeed scapegoats sacrificed to political expediency? Here, at last, after many years in obscurity, is the story told at first hand.

Editor's note to the new edition published by Angus & Robertson, Sydney, 1982: It is George Witton's own straightforward account of events which led to the controversial trial, of the trial itself and later of his prison life. There is some mystery surrounding the first publication of 'Scapegoats of the Empire' in 1907. Two editions were published in that year but very few copies are found today. A story exists that a fire in the printery destroyed one edition but rumours persist that the book was censored.

Whatever the reasons for past silence, it is time George Witton's quite candid voice was heard again in his own defence. In his well-researched afterword to this edition Geoffrey Embleton has presented some startling evidence in the form of a letter from Witton to his defence counsel, Thomas. Lodged at the Mitchell Library and marked at Thomas's request, "Not to be opened until 1970" the letter was intended to reveal the whole truth when that truth could no longer hurt the descendants of those involved. Perhaps one man's truth is not the whole truth, but Witton's view at the least adds a new dimension to this fascinating and painful story.' Editor's note to the new edition published by Angus & Robertson, Sydney, 1982.