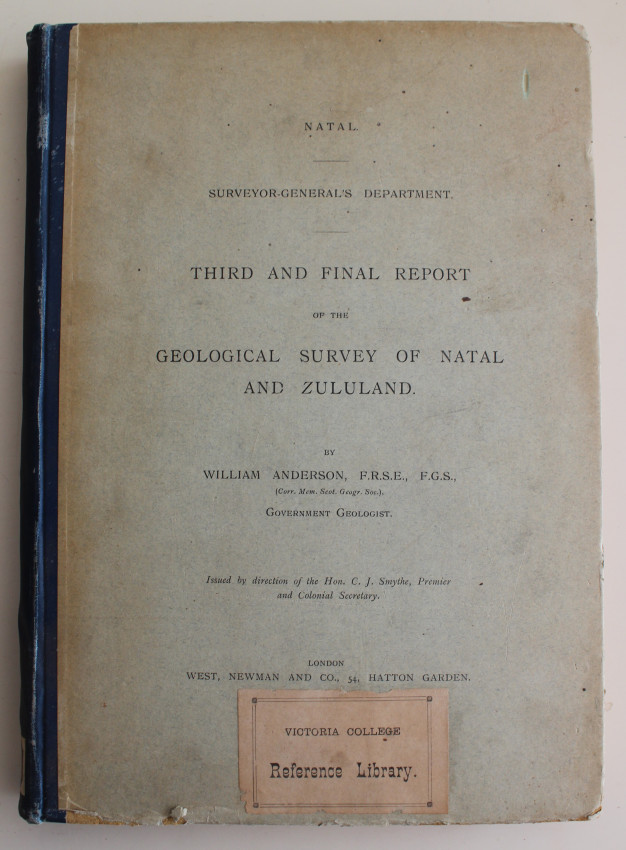 1. The Second Report of the Geological Survey of Natal and Zululand 1904.  Issued by direction of the Hon. Joseph Baynes, C.M.G., Minister of Lands and Works. Ex-library copy with 169 pages.

The content: Cretaceous Fossils of Natal (The Umkwelane Hill Deposit, Zululand) Report on Collections of Natal Fossil Plants from 1) the Ecca Coal series of Umhlali on the north-east coast 2) the Drakensberg Range in West Natal. Geological Traverse from Pietermaritzburg to Umzinto. Geological report of the Melmoth district, Zululand. Report on the Stormberg Coal Measures to the west of Molteno. Explanations of Plates.

2. Third and Final Report of the Geological Survey of Natal and Zululand.  Issued by direction of the Hon. C.J. Smythe, Premier and Colonial Secretary.

Condition: The 3rd and final report copy is in good condition. Shelf wear to book edges. An ex-library copy. The 2nd report copy shows signs of earlier water or damp to the outer boards and end papers. Not affecting the content. These should be seen as research copies only.