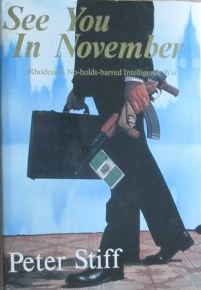 See You in November (Signed)

This is the true account of the Rhodesian intelligence war, told by Taffy, the code name of the leader of the Central Intelligence Organisation's most secret externally operational team.

It is an incredible story of more than six years of high adventure, of bravery and of cunning, of fortitude and of an aloneness brought about by the participants being aware that if they were caught, their country, Rhodesia, would disavow all knowledge of them.

It is a story, which, if Rhodesia still existed, would never have been told.

Two had earned their impeccable credentials in the elite ranks of the unsurpassed war school that is Britains's 22-SAS Regiment and the other was a Zambian farmer, born in that country when it was still Northern Rhodesia.

Although their ranks were thin, first by death and then by capture, they succeeded brilliantly in creating a chasm between Rhodesia's main terrorist enemies rear based in Zambia, Robert Mugabe's ZANU and Joshua Nkomo's ZAPU, that lasts to the present day. They led both parties by the nose on a bewildering dance of death and destruction, making each party believe their rivals were the culprits. By assassinating Herbert Chitepo, ZANU's Chairman, they were responsible for President Kaunda of Zambia arresting all members of the ZANLA Military High Command as murder suspects and expelling ZANU from the country, halting their war effort for 18 months.

Included, also, are previously unpublished and sensational details of the training and operations carried out by Taffy while serving with Britain's 22-SAS Regiment and the MI-6 plan to assassinate Colonel Gadaffi of Libya in 1970, foiled when America's CIA found out and stopped it.

Sunshine and Storm in Rhodesia (1896)

The Constitution of SOUTHERN RHODESIA (1914)

VALLEY OF THE IRONWOODS