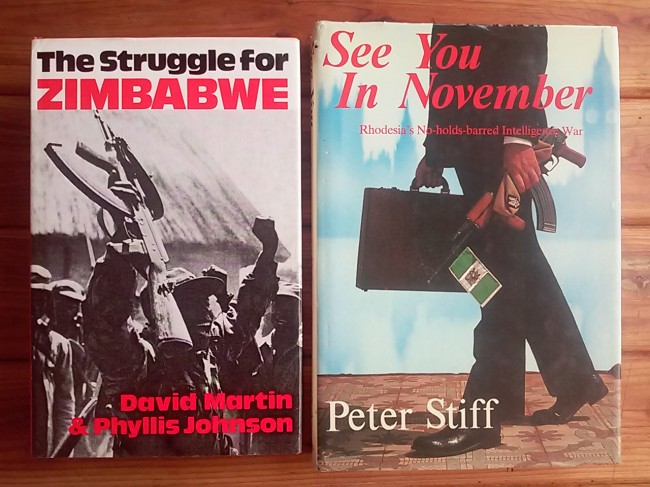 See You In November; & The Struggle For Zimbabwe

See You In November (352pp.) is the "no holds barred" account of Rhodesia's intelligence war, covering subjects as diverse as Libya and Gadaffi's coup in 1969, CIA and SAS recce team involvement in Rhodesia, ZANU/ZANLA/ZAPU/ZIPRA, and previously unpublished and sensational details of the training and operations carried out by Taffy (CIO leader) while serving with Britain's 22-SAS Regiment and the MI-6 plan to assassinate Col.Gadaffi in 1970, foiled by the CIA, who stopped it.

The Struggle For Zimbabwe (378pp.) is the definitive book on the decisive phase of the struggle - the personalities, the military strategies, the political upheavals, and historical processes which led to the election outcome announced on 4 March 1980. The origins of the scramble for Africa are explored, the days of the BSAP, the colony of Souther Rhodesia and Federation, the increasing African political activity in the fifties, and the foundation of ZAPU and ZANU, the inception of the armed struggle in 1966, the course of the war, and the various attempts to reach a settlement before the final ceasefire.

Desert Life. Recollections of An Expedition in the Soudan