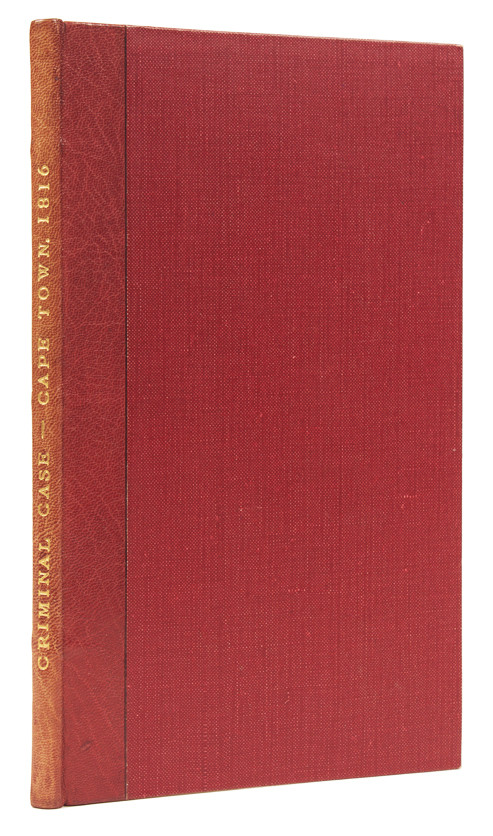 Text in English and Dutch

A South African Bibliography vol. 1 page 400: Contains the text of official documents concerning the Slagtersnek Rebellion of 1815. The full contents are listed here.

The Slagters Nek Rebellion In 1815 Frederik Bezuidenhout, a farmer from the eastern border of the Cape Colony, was controversially summoned to appear before a magistrate's court and charged with mistreating one of his Khoi labourers. He resisted arrest and fled to a cave near his home where he defended himself against the soldiers sent to capture him, and was killed by one of the soldiers. One of his brothers, Hans Bezuidenhout, swore revenge and organised a rebellion against the British colonial rulers. On 18th November 1815, a commando of rebels thus met a British armed force at Slachter's Nek, on the eastern frontier. Though negotiations failed, no shots were fired and twenty rebels surrendered, while the majority of the rest simply left for home. However, some of the leaders - including Hans Bezuidenhout, refused to do so and on 29th November 1815, they were attacked by colonial troops. This time all except Bezuidenhout surrendered and he, like his brother, then died while resisting arrest.

The rebels were finally charged and a number of them were cleared of wrongdoing, while others were imprisoned or banished. Six were sentenced to death and five of them ultimately hanged on the 9th of March, 1816. On 9th March 1916, exactly 100 years after the execution, a monument was unveiled on the site where the hanging took place.https://esat.sun.ac.za/index.php/Slagtersnek