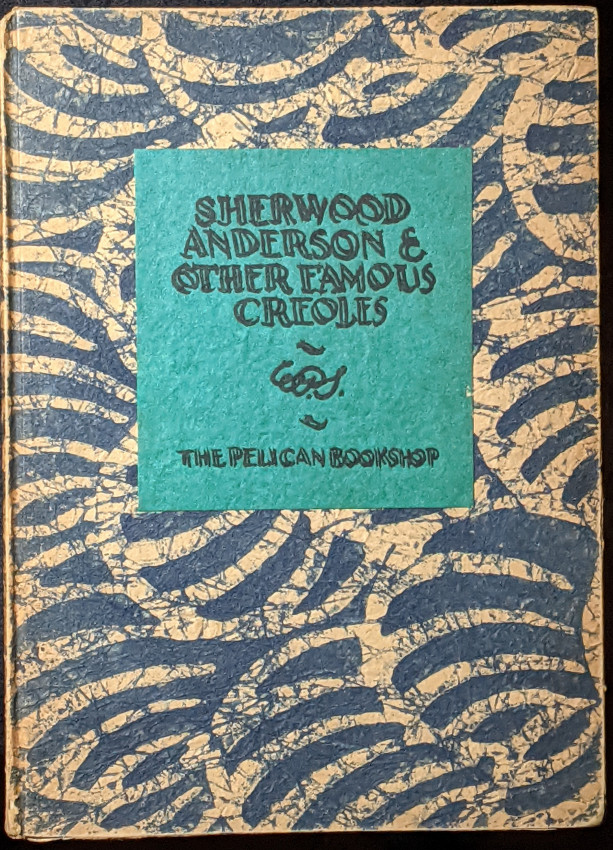 "First, let me tell you something about our Quarter, the Vieux Carre. Do you know our quarter, with its narrow streets, its old wrought-iron balconies and its southern European atmosphere? An atmosphere of richness and soft laughter, you know. It has a kind of ease, a kind of awareness of the unimportance of things that outlanders like myself - I am not a native - were taught to believe important." -Faulkner.

SHERWOOD ANDERSON & OTHER FAMOUS CREOLES: A GALLERY OF CONTEMPORARY NEW ORLEANS.  Drawn by Wm. Spratling & Arranged by Wm. Faulkner. New Orleans: Robt. H. True Company, 1926. The Pelican Bookshop on Royal Street was a favorite hangout of the French Quarter's literary crowd, and the "Pelican Bookshop Press" seems to have been conjured into being for the sole purpose of publishing what The Booklover's Guide to New Orleans calls "one of the great literary curiosities in the city's history," of interest primarily to literary scholars and bibliophiles as one of Faulkner's earliest works.

The title was conceived by Spratling as a fun New Orleans version of New York based Mexican artist Miguel Covarrubias' The Prince of Wales and Other Famous Americans, a compilation of his caricatures of celebrities published in 1925, and credited on the copyright page: "With Respectful Deference To Miguel Covarrubias". Dedicated "To All the Artful and Crafty Ones of the French Quarter" beneath Latin epigraph "Ave et Cave - per Ars ad Artis."

"THIS, THE FIRST PUBLICATION OF THE PELICAN BOOKSHOP PRESS, WAS PRINTED IN NEW ORLEANS BY ROBT. H. TRUE COMPANY, AND THE FIRST EDITION LIMITED TO 250 NUMBERED COPIES, OF WHICH THIS IS NUMBER 1."

The present offering, signed by Spratling, is actually the first of the special "fifty copies decorated by hand with water color and autographed", as noted in a contemporary publication announcement.

According to Spratling: "In 1926 Faulkner and I, as a sort of private joke, published a book...The title was a parody on Miguel Covarrubias' The Prince of Wales and Other Famous Americans, which had just appeared. The thing consisted of a group of my caricatures of various people who were then engaged (no matter how remotely) with the arts in New Orleans. Faulkner did the editing and we paid old man Pfaff to print us four hundred copies, which we then proceeded to unload on our friends at a dollar and a half a copy."

Perhaps the same copy mentioned in Dixie Bohemia: A French Quarter Circle in the 1920s on page three?: "Faulkner and Spratling seem to have meant their book to be a sort of teasing tribute to Anderson, but that's not exactly how it worked out.

Spratling recalled that when he and Faulkner proudly gave Anderson a copy of the book the evening it came off the press, he looked it over, scowled, and said, "I don't think it's very funny."

Spratling joked that Anderson was taking himself very seriously at the time because someone had recently called him the "Dean of American Literature," but Faulkner, a writer himself, was more sympathetic; he came to believe that he had truly hurt Anderson by making fun of his style at a time when the older man was beginning to recognize that he had passed his prime and had nothing left but style.

Faulkner regretted what he called "the unhappy caricature affair" for the rest of his life - although in fact Anderson may not have been all that hurt: he apparently gave his copy away and asked Spratling for another."

Provenance: Acquired by a New Orleans collector c1970 from the estate of Crescent City poet and playwright Samuel Louis Gilmore, Jr., and has remained in his possession for over forty years.

"Famous Creoles shows the lanky Gilmore in a typically languid pose. It was one of the book's inside jokes that Spratling's drawing and its caption refer to the flower-bearing shoe-fetishist who is one of Venus's attendants in Aubrey Beardsley's Under the Hill.

When Gilmore made New Orleans Magazine's list of eligible bachelors, the editors warned: "Flirts with the muses only."...On the storied Lake Pontchartrain excursion, Gilmore made a pass at William Spratling: "I'm sorry but I just like boys and that's all there is to it," he explained when Spratling demurred.

Subsequently, Gilmore served as the model for Mark Frost, author of short and obscure poems and inveterate bummer of cigarettes, in Faulkner's Mosquitoes."

Faulkner concludes his introduction thus: "We have one priceless universal trait, we Americans. That trait is our humor. What a pity it is that it is not more prevalent in our art. This characteristic alone, being national and indigenous, could, by concentrating our emotional forces inward upon themselves, do for us what England's insularity did for English art during the reign of Elizabeth.

One trouble with us American artists is that we take our art and ourselves too seriously. And perhaps seeing ourselves in the eyes of our fellow artists, will enable those who have strayed to establish anew a sound contact with the fountainhead of American life."