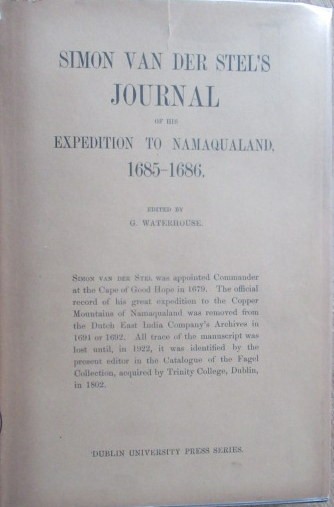 Hardback with unclipped dustcover over original dark green boards with gilt Dublin University vignette to upper board, and gilt lettering to spine.

Simon Van Der Stel was appointed Commander at the Cape of Good Hope in 1679. The official record of his great expedition to the Copper Mountains of Namaqualand was removed from the Dutch East India Company's Archives in 1691 or 1692.

All trace of the manuscript was lost until, in 1922, it was identified by the present editor in the Catalogue of the Fagel Collection, acquired by Trinity College, Dublin, in 1802.

The first notice of the discovery of Simon van der Stel's long lost Journal appeared inThe Geographical Journal for October, 1924, and it was followed by a brief summary in Discovery in January, 1926, a lecture before the Manchester Geographical Society in January, 1930, and an abridged translation, Hermathena, 1931.