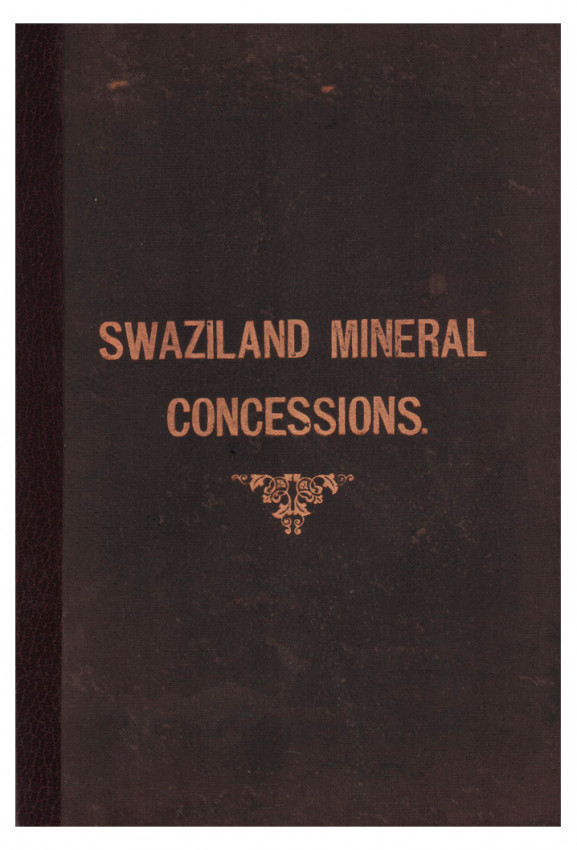 Published: Johannesburg, no date (circa 1910)

750 x 1025 mm, printed in colours on paper and dissected and mounted on linen. Includes a key of all the holders of mining concessions and the companies. With an Ideal Section from Steynsdorp to Lebombo as an insert. Folds into brown cloth covered boards reinforced on the spine, marbled end papers, titled gilt on the upper cover , a very good copy.

Crouch (Jonathan) Tin Mining in the Valley of Heaven, African Studies Seminar Paper, March 1987, University of the Witwatersrand, African Studies Institute. In the 1890s little or no profitable tin mining took place. Concessions over tin-bearing land were held by a number of small syndicates who extracted the metal in a desultory, wasteful and haphazard manner, using tribute miners. The most important of the companies was the Ryan Tin Syndicate which raised approximately 500 tons of dressed tin in the 1890s. In 1892 the Swazi Resident Advisor, Offy Shepstone, persuaded a reluctant group of Rand mining capitalists that tin was 'the best and only chance of making something out of Swaziland.' Capital was subscribed and the Ryan Syndicate acquired title to seven concessions covering an area of 50 000 acres in the Mbabane and Ezulwini areas. The Ryan Syndicate staggered along for six years, alternating between tribute mining and direct production.

The success of the tributors was mixed. Most obtained sizable advances from the company and eventually left the country heavily in debt. Only one, an Australian named Foy with previous experience in tin, made a living. In 1899 the Syndicate was forced to liquidate its assets, a victim of high transport costs, inexperienced management, labour and capital shortages, and political uncertainty. The plant that remained was smashed and looted during the South African War. Between 1899 and 1905 there was no mining whatever (Fawns, 1905). In 1906 world tin prices rose above £200 a ton and Swaziland tin became a viable proposition. By 1911 five tin properties were being worked. Between 1905 and 1920 cassiterite tin constituted over 50% of Swaziland's exports by value. The success of the industry was consequently a major item on the agenda of the impoverished British colonial administration in the country.

PORTUGAL – REPORT ON THE PORT AND RAILWAY OF LORENZO MARQUES.

STRELITZIAS OF THE WORLD: A Historical & Contemporary Exploration

THE REPUBLIC OF NATAL.