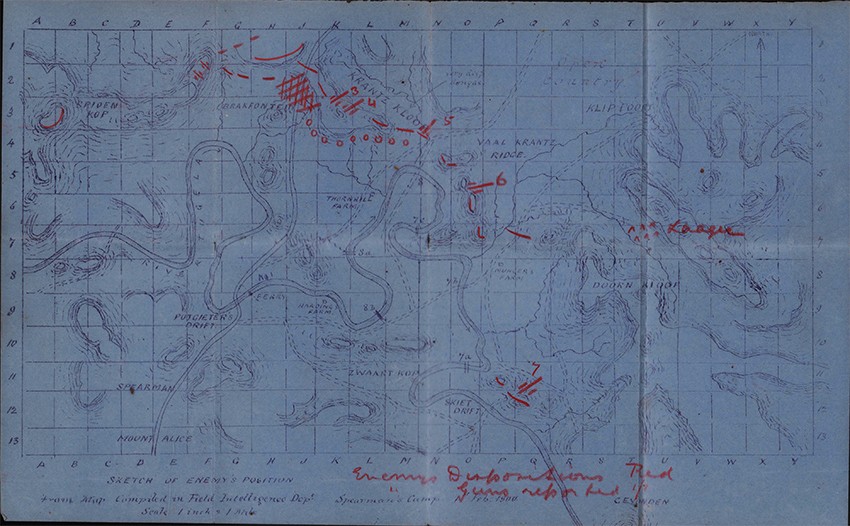 SKETCH OF THE ENEMY POSITION

Hand drawn sketch map (200 x330mm) of the area near Spionkop, Mount Alice, Potgieter's Drift, Spearmans Farm, Brakfontien Tugela River, Zwaartkop, on blue paper with annotations in red pencil, extracted from another notebook with white paper marks on the back of it, a good copy.

From Mount Alice, an eminence about 1000 feet above the river, a magnificent panoramic view of the Tugela valley and an immense tract of country all around was to be obtained. The remarkably clear atmosphere enabled far-distant objects to be intelligibly delineated with the telescope, which ordinarily cannot be brought within focus. Far away on our left, to the westward, rose the stately Drakensberg Range, whose lofty peaks and pinnacles, rising to 11, 200 feet, were grandly outlined against the sky. To the eastward (our right), some twenty miles or so away, stood Mount 'Bulwana, dominating beleaguered Ladysmith with a 6-inch "Long Tom" whose familiar puffs of smoke were grim reminders to the spectator of his duty. Intrenchments, presumably those on Waggon Hill and Caesar's Camp, could be easily discerned, from whence a blinking heliograph was busily flashing and acknowledging official cypher despatches, and private Morse messages. The view in our immediate front was a picturesque scene. There the historic Tugela was winding itself snake-like fashion through a rich valley, forming two distinctive loops, which were found to be serious natural obstacles in the respective operations that followed. The valley extended in a wide concave, whose furthest edge (Brakfontein Ridge) was between seven and eight thousand yards distant from the hills south of the river, the ground gradually rising from the river towards the surrounding hills, meeting the plain beyond where the roads which lead to Ladysmith converge.

Directly beneath Mount Alice, on the north side, was a plateau extending almost to the river, and about 400 feet above its level. A main road from Spearman's Camping-ground wended round Mount Alice, across this plateau, then dipped sharply down to Potgieters Drift. Both rear wheels of ammunition waggons had to be secured and skidded behind the oxen, and the naval 12-pounder guns eased down with the drag-ropes, owing to the steep declivity of the track just here, when the guns afterwards took this route. On our left front the Spion Kop Range towered some 500 feet higher than Mount Alice, the nearest firing range being about 5000 yards, and the farthest nearly 10,000 yards distant. Far away in the dim distance, beyond Brakfontein, the outline of the Biggarsberg Range was perceptible, on the other side of which is Dundee, standing in the centre of the Natal coalfields. The tops of our hills were park-like in their wealth of rich grass and sprinkling of trees. The northern sides were exceedingly steep, and thickly covered with mimosa and cactus trees, while the southern sides were scantily clothed, and approached by a gentle slope, with the exception of Zwaatz Kop, which was fairly precipitous on all sides. A sharp dip connected the trio of hills—Mount Alice, Signal Hill, Zwaatz Kop—in our occupation. https://www.angloboerwar.com/books/73-crowe-the-commission-of-hms-terrible/1621-crowe-chapter-ix-the-great-flank-march-westwardarrival-of-bullers-army-at-spearmans