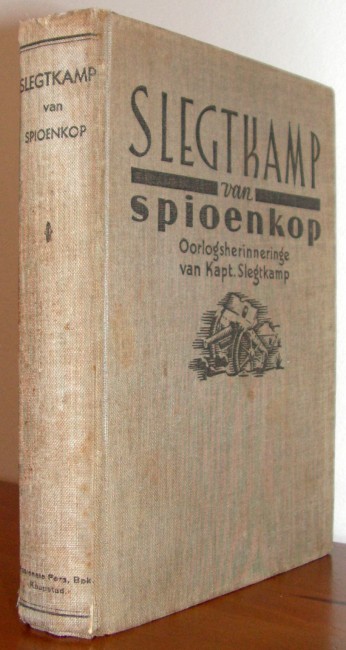 Email or share
Small squarish 8vo; original grey cloth, lettered in black on spine, with black letters and cannon device to upper cover; pp. (viii) + 312; two portrait plates. Cloth somewhat mottled, and worn to extremities; ownership inscription, dated 1940, to front free endpaper; regular browning; trace of foxing; occasional fingering; archival tape strengthening to gutter between front free endpaper and half-title. Good condition. Afrikaans text. (Nienaber I, p. 254) "At the battle of Tabanyama (20.1.1900), a prologue to the battle of Spioenkop (24.1.1900), Slegtkamp won special recognition. When the burghers evacuated a hill in the Tabanyama mountain range after a heavy bombardment, and the right flank of the Boers was exposed, Slegtkamp and two fellow scouts, Albert de Roos and Jack Hindon, climbed the hill on their own initiative and subjected the left flank of the British soldiers to heavy fire. Under the impression that the hill was strongly garrisoned, the British soldiers retreated. The morale of the other burghers now being strengthened, they reoccupied the hill. Thus the way was paved for the brilliant victory at Spioenkop four days later. ... Throughout his life he supported the republican ideal and in the late thirties he joined the Ossewa-Brandwag, of which, despite his advanced age, he was an active member, later becoming general-in-chief on the Highveld. He spent his last years peacefully in his home town, Middlelburg. Slegtkamp was short and thin. Restless and at times quick-tempered, he was nevertheless a fearless man who, although he could not easily adapt to peace conditions, identified himself completely with the fate of his adopted country." - DSAB V, pp. 714-5