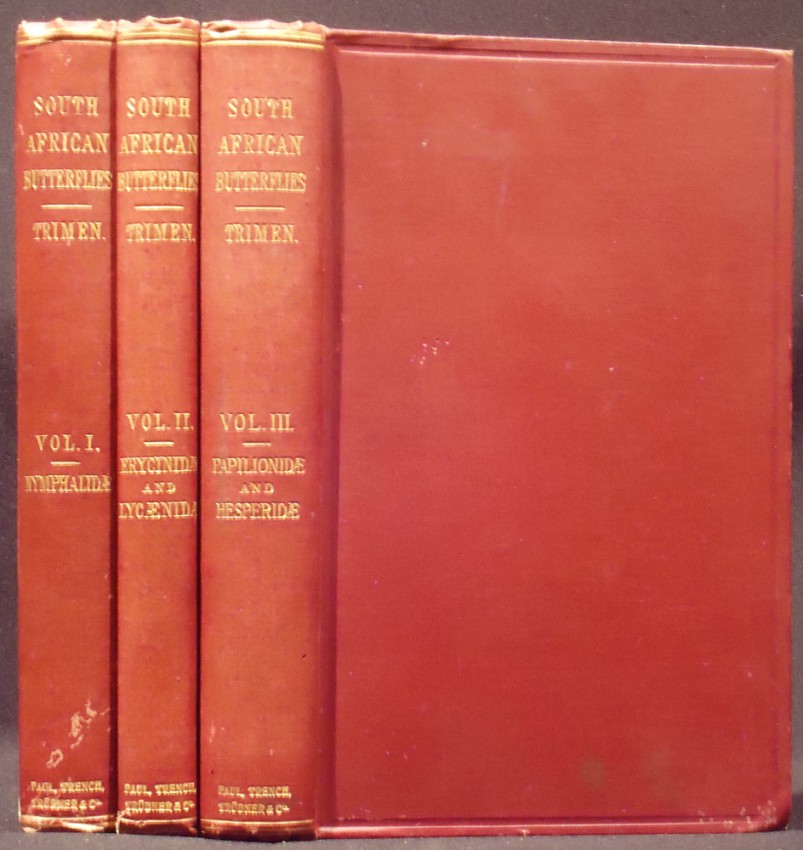 A Monograph of the Extra-Tropical Species, by Roland Trimen, Curator of the South African Museum, Cape Town, assisted by James Henry Bowker, Colonel (retired) in the Cape Service

Mendelssohn (Sidney) South African Bibliography, Volume 2 page 525: The author states, " The book entitled ' Rhopalocera Africae Australis; A Catalogue of South African Butterflies ' has for long been out of print as well as out of date. As the new work is much more than a second edition of the former one, I have given it a different title, concisely descriptive of its character and scope." Mr. Trimen remarks, " Although for many years fortunately situated as regards the prosecution of this work by my tenure of the Curatorship of the South African Museum, I have on the other hand had to sustain the serious disadvantage of being tied by official duties to a locality lamentably barren of butterfly life. Cape Town and its neighbourhood is absolutely not more productive of species than Brighton. " He acknowledges the great assistance he had received from Colonel Bowker and a large number of students and collectors throughout South Africa, the United Kingdom, and the continent of Europe who had enabled him to bring the work to a successful issue.

Roland Trimen FRS (29 October 1840 in London – 25 July 1916 in London) was a British-South African entomologist,best known for South African Butterflies (1887–89), a collaborative work with Colonel James Henry Bowker. Trimen arrived at the Cape in 1859, taking up a post in the Auditor-General's office in Cape Town and then transferred to the office of the Colonial Secretary. In 1872 he became curator of the South African Museum in Cape Town, succeeding Edgar Leopold Layard. He attended the international congress on Phylloxera in Bordeaux in 1880. Failing health caused him to resign his position at the South African Museum in 1893. Trimen won the Darwin Medal of the Royal Society in 1910 and was the director of the South African Museum of Cape Town. Trimen was born the son of Richard and Mary Ann Esther Trimen and was the elder brother of Henry Trimen, botanist and director of the botanical gardens at Peradeniya, Ceylon. https://en.wikipedia.org/wiki/Roland_Trimen 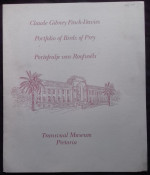 Portfolio of Birds of Prey

ON THE TYPES OF SOUTH AFRICAN MICROLEPIDOPTERA