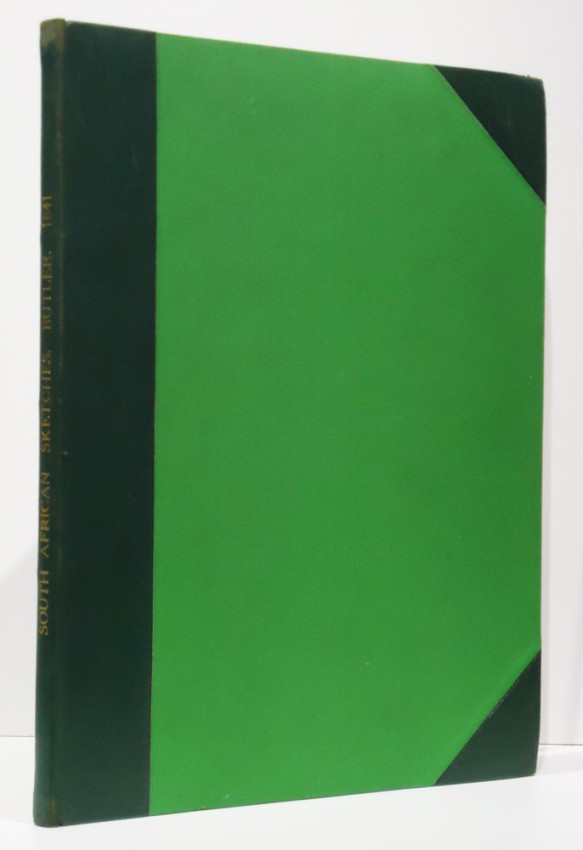 First edition. 15 pages letterpress and 15 lithograph plates containing 31 drawings of which 16 are hand-coloured, rebound in half green leather with matching cloth boards, titled gilt on the spine, a very good copy.

Mendelssohn (Sidney) South African Bibliography Volume 1, page 235: A rather scarce volume of hunting scenes in the Cape. The work is devoted to an illustrated description of sporting adventures on the "Bontebok Flats" in Kaffraria, near the Kat River Settlement, "at the extreme verge of the Cape Colony, and beneath the mountain ranges amongst whose fertile valley the Kat, a tributary of the Great Fish River, has its origin." The sketches were made "to relieve the dreariness of two years' residence upon a barbarian frontier," and they serve as an excellent record of the appearance of this part of South Africa during the first half of the nineteenth century.

Many of them are described from extracts "from a journal written on the spot," which affords a capital account of the sport enjoyed in these districts, with some interesting notes on the political and military position of the country. The writer evidently did not hold with the views of the party who were in the habit of making excuses for the ravages of the Kaffirs, and of attacking the Boers for their brutality towards them, and he remarks, " The Dutch inhabitants of the colony, impoverished by laws, which, while they loosened the bonds of their slaves, substantiated no sufficient system of control for their servants, seeing nothing but the consummation of their ruin in the new frontier policy, commenced an emigration upon a scale of startling magnitude." There are 15 plates, most of which have two or more engravings, many of them being coloured.

Edna Bradlow's article in the Standard Encyclopaedia of South Africa volume 2, page 628 – 9 refers: 'Though he served as an ensign in the 27th regiment on the eastern cape frontier (1835 -39) Henry Butler, an Irish officer appears in the Army List as Captain in the 59th Regiment. His volume of hand -coloured lithographs South African Sketches was published in 1841. In his preface he states that the object of his sketchbook was both to relieve the dreariness of two years' residence upon a 'barbarian frontier and to record the profusion of game which abounded on the Bontebok Flats near the Kat River Settlement. The letterpress and illustrations are of value in providing a full often amusing description of the topography, flora, fauna, climate and inhabitant of the region around present Fort Beaufort.