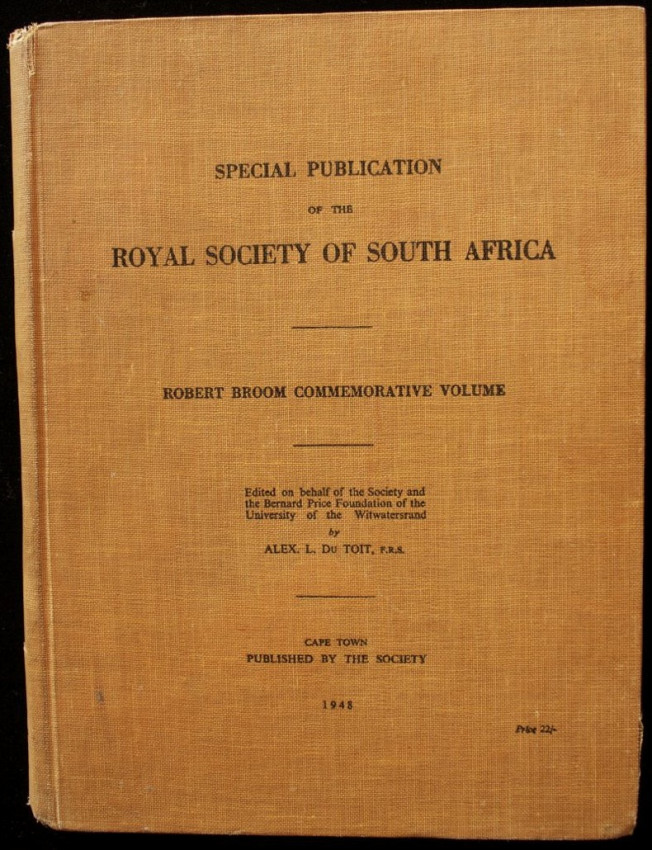 Robert Broom is remembered for having discovered the earliest hominin fossils.

v + 257pp. Illustrated. Inscribed by Broom on the front endpaper.

Robert Broom made a series of spectacular finds in and around the Sterkfontein caves. This region north-west of Johannesburg is known today as The Cradle of Humankind World Heritage Site because of its importance as a site for the study of early homonin fossils. His finds in the cave included fragments from six homonins which he called Pleisianthropus Transvaalensis, popularly known as Mrs. Ples.

At Swartkrans in 1948 Broom made his most famous discovery, that of a fossilized homonin skull with a robust appearance. It had a bulging and continuous brow, a broad flat face and deep jaw with large chewing teeth. This early homonin was estimated to be about 1.8 million years old. He named the genus Paranthopus robustus.

Before his discoveries that would make him world-famous he worked as a professor of geology and paleontology at the University of Stellenbosch, but was later forced out of this position for promoting the belief in evolution.

The boards are rubbed and edge-worn, with creases and two horizontal tears to the spine, and fraying to the head and foot of the spine. The name of a member of the Broom family is written on the inside front board (Diana Gardiner, née Broom), and the endpaper opposite is inscribed by Robert Broom. The front endpaper has staples through it, that hold a newspaper clipping in position on the other side. The newspaper article is a short biographical sketch and appreciation on Broom, written by Professor Phillip Tobias. Internally the book is clean and unmarked.