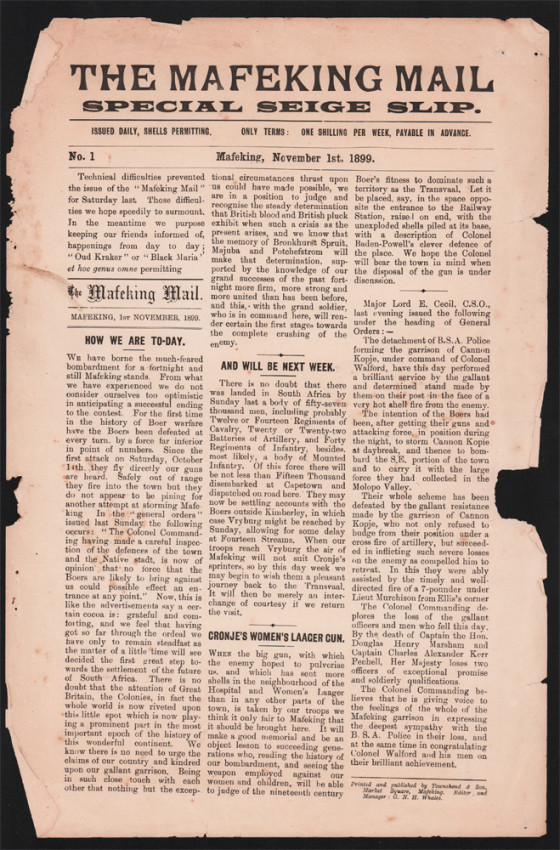 First edition: 149 loose issues – unbound, lacking nos. 58 - 60, printed on various types of paper, many of the siege slips particularly those printed on the very friable brown newsprint are frayed at the edges, a good set.

No. 56 was not issued, but the explanation from Townshend & Son is attached. Slip 45 which was withdrawn during the siege is included, as well as a special slip between 88 and 89 recording the capture of Cronje, the fall of Colesburg to the British and the 'Glorious slaughter of Women-slayers. ONE Thousand Boer Killed. SEVEN THOUSAND surrendered.'

In a recent article Dr Robin Pelteret has published the results of his research into the publication of the Siege Slips. 'In Mafeking, there was to exist a fragile peace between the publisher and editor of the Mafeking Mail Special Siege Slip, G.N.H. Whales, and the military authorities. Whales was somewhat acerbic of tongue. He once publicly thanked the press censor for saving his life, a Boer shell having destroyed his editorial chair whilst he was submitting his newspaper copy for military scrutiny elsewhere in the village. He was to be briefly imprisoned on one occasion for publishing querulous criticism on the conduct of the siege and the restrictions on the availability of news. In protest, he was known to publish empty columns (No. 47) and indeed cancelled one whole edition (No.45) as visible disregard and mute testimony to the censor's liberal use of a blue pencil.' Discussing entrepreneurship and the siege of Mafeking he writes, ‘Equally the spirit of entrepreurship was manifest in the publication of The Mafeking Mail: Special Siege Slip under the management and editorship of G.N.H. Whales. Townsend and Whale clearly perceived the curiosity value of their publication, and printer and editor proceeded to create a business of what was initially a community service.