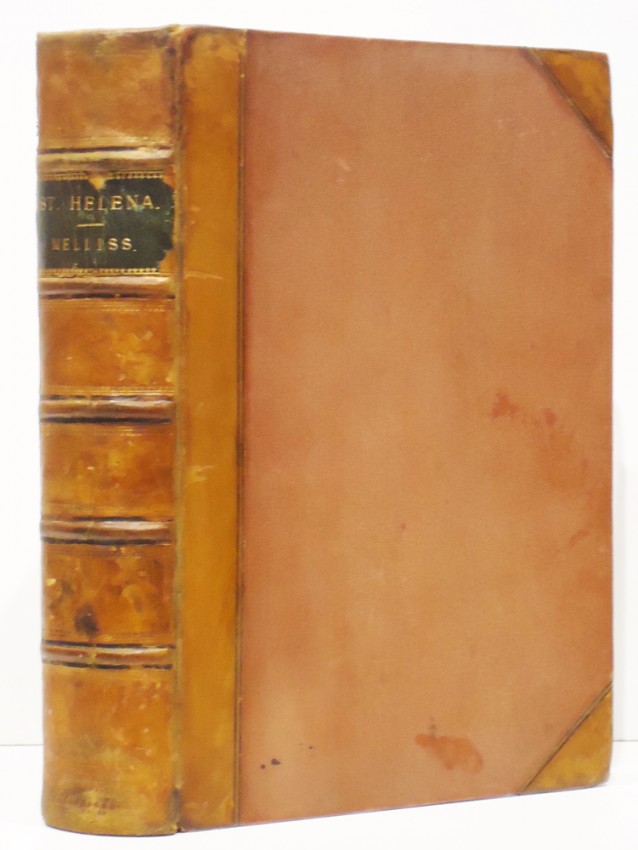 A physical, historical, and topographical description of the island, including its geology, fauna, flora, and meteorology.

First edition: xiv, 426 pages + 16 pages publisher's catalogue, colour lithographic frontispiece and 6 similar plates laid down including one of Napoleon's tomb opposite page 27, 45 further lithographic plates - including 37 botanical colour lithographs, 3 maps - 2 are double page spreads, marbled end papers with book plate of Alpheus Fuller Williams on the front paste down end paper, starting to wear at the hinges, half brown leather with matching cloth boards, black title label gilt on the spine with a slight chip at the top of the label, a very good copy.

Presentation inscription pasted down on a front free endpaper reads: S Terry Esq. With the author's kind regards. Easter 1880. Also pasted down is a letter to him by John Mellis dated 19th December 1882.

John Charles Melliss was a British engineer, formerly a military officer in the Royal Engineers. J.C. Mellis was also employed in St Helena by the colonial government, working on projects such as the restoration of Longwood House, Napoleon's home (1815-1821) during his exile on the island.

During his stay on St Helena, J.C. Melliss was encouraged to take an interest in the natural history and on his return to England, Melliss published a landmark book St Helena which established him as the first historian of the island and included a section on natural history intended as a precursor for an ambitious broader study of the African islands of the southern Atlantic. The botanical illustrations for the floristic survey were by his wife. His book provides important documentary evidence of a unique flora under threat as it was being heavily modifed by the island's inhabitants and a number of species were in the process of becoming extinct.

Melliss was interested in all aspects of natural history and a wide range of specimens were deposited at the Natural History Museum in London and with other organisations. https://plants.jstor.org/stable/10.5555/al.ap.person.bm000041108