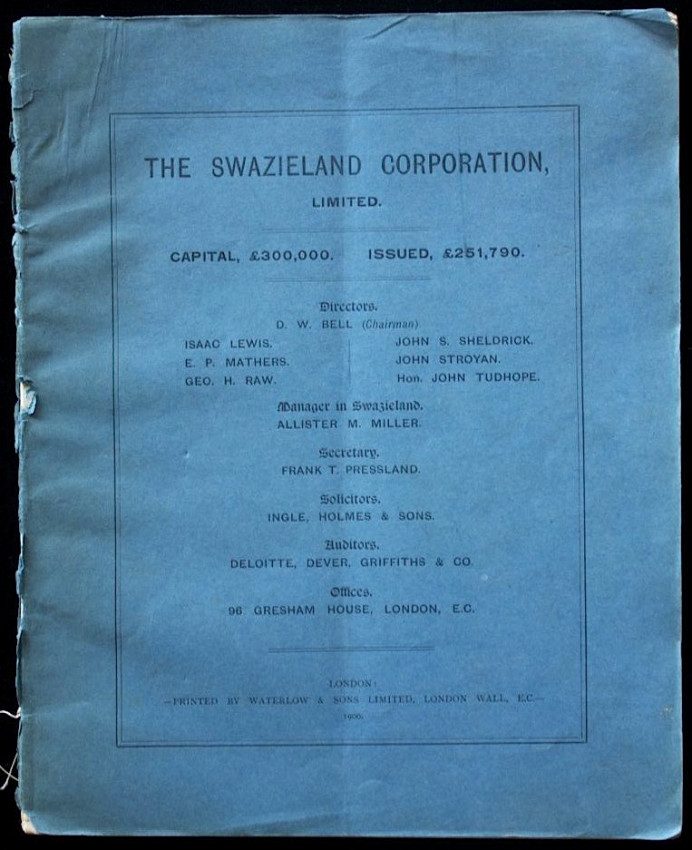 50pp. 10 plates, tables. Contents clean with stain on rear wrap. Book is complete but has split between pages 16 & 17.

A report on Swaziland and the operations of the Swazieland Corporation, Limited, from its Swaziland manager, Allister M. Miller.

Miller notes in vol. xxxi of "Proceedings of the Royal Colonial Institute" that:

'In the year 1889, when Swaziland was still "the home of savagery," the permanent white population barely numbered 400: ten years later it had quadrupled, and a town had sprung up with all the elements of civilised and commercial life. The country embraces an area of about 8000 square miles, and from 1890 to 1895 was governed by a joint British and Boer administration, after which the Transvaal assumed full rights of protection, jurisdiction, &c., up to the period of the South African War.'  Miller then proceeds to give a general description of the natural features, climate, rivers, geological formation, timber, and native history of the country, with details of its mineral wealth, which at this time included gold, tin, iron, and coal. Some information is afforded with regard to Umbandine, King of Swaziland, from 1875 to 1889, and Miller states that his "commercial instincts were highly developed," and that at the time of his death he was in receipt of 12,000 a year from concessions granted in the country. Mr. Miller remarked that out of the "five million acres comprising Swaziland's superficial area, about two millions consist of land of high quality and eminently suited to the settlement of small agriculturists."

During the SABIB survey only single copy of this title was located in the Mendelssohn Library, Library of Parliament. SABIB Vol.4, page 449.