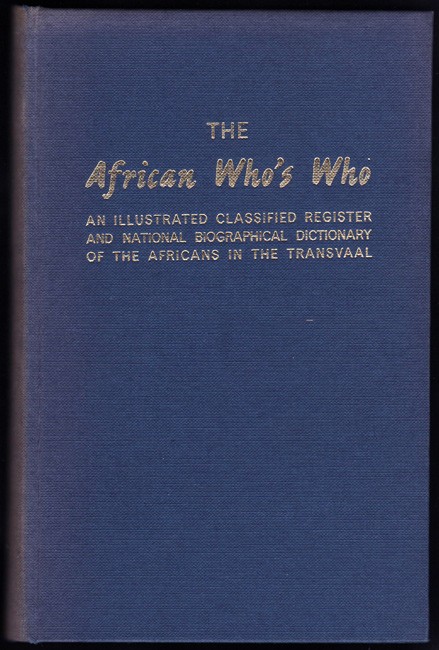 THE AFRICAN WHO’S WHO

Published: Johannesburg, No date (circa 1965)

3rd Edition (Revised and Enlarged). But the first edition thus. In 1930 and 1932 Skota published two edition under the title The African Yearly Register, being an illustrated national biographical (who’s who) of black folks in Africa, which covered the whole of the African continent. He explains in a preface that in the 1960’s political developments made compiling an Africa-wide Who’s Who impossible so he concentrated on the Transvaal with the intention of following this with editions for the Cape, Natal, O.F.S., Transkei and the British Protectorates.

Included is a biography and photograph if Skota himself. Born in Kimberly. In 1912 he was organiser and later sub-editor of the Abanthu-Batho, then the only African newspaper in the Transvaal.In 1922 he founded and edited African Shield. He was later appointed president of the Bechuanaland and Griqualand West National Organisation which was subsequently banned. He was also an executive member of the All-African Convention.

Johannesburg, Distributed by the Central News Agency, limited., No date (circa 1965)

Mentzel, O F; translated from the German by Margaret Greenlees

The Cape in Mid-Eighteenth Century. Being the Biography of Rudolph Siegfried Allemann 1692-1762&hellip;