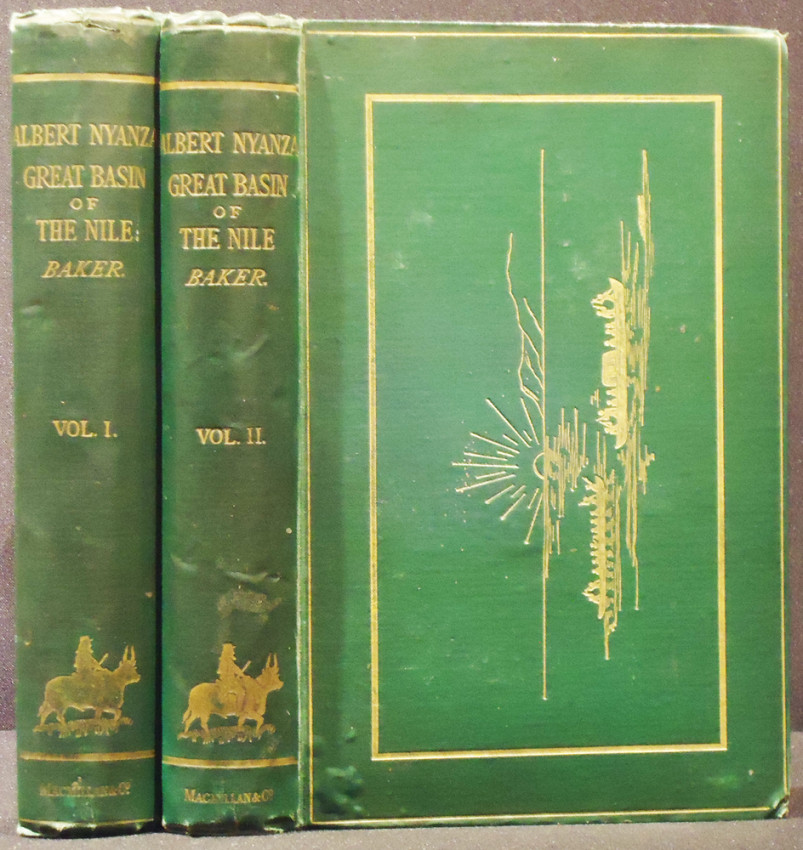 THE ALBERT N'YANZA GREAT BASIN OF THE NILE

And Explorations of the Nile Sources with maps, illustrations and portraits in two volumes.

First Edition: Two volumes: I. xxx, 395. II. ix, 384 pages, frontispiece portraits of Samuel and Mrs Baker in volume 1, title page with a light water stain at the bottom of the page and on several other pages, tinted lithographic frontispiece in volume II, 2 maps - 1 large folding slightly torn at the first fold, 14 wood engraved (including a plate not called for at page 351 in volume 1, ‘Skirmish with the natives’), 20 text illustrations, original green cloth gilt decorated on the upper covers and gilt titled on the spines, original brown endpapers with the binder’s ticket on the final paste-down endpaper – strengthened with matching paper, edges uncut with light foxing on the page edges, contents bright, a good set.

Editor’s note to the facsimile reprint published by Cambridge University Press (2011):‘Sir Samuel Baker (1821–93) was one of the most famous Victorian explorers and hunters. First published in two illustrated volumes in 1866, this account of his most celebrated expedition is amongst the most important works of its type. Baker promises 'to take the reader by the hand, and lead him step by step … through scorching deserts and thirsty sands; through swamp and jungle … until I bring him, faint with the wearying journey, to that high cliff … from which he shall look down upon the vast Albert Lake and drink with me from the sources of the Nile!' He is taken a prisoner of a native king. Baker offers a number of 'gifts' to buy his release, and after an arduous journey, with his wife in a coma, in March 1864 he reaches Luta N'zige, which he renames in memory of Prince Albert. A compelling account of an historic adventure.’