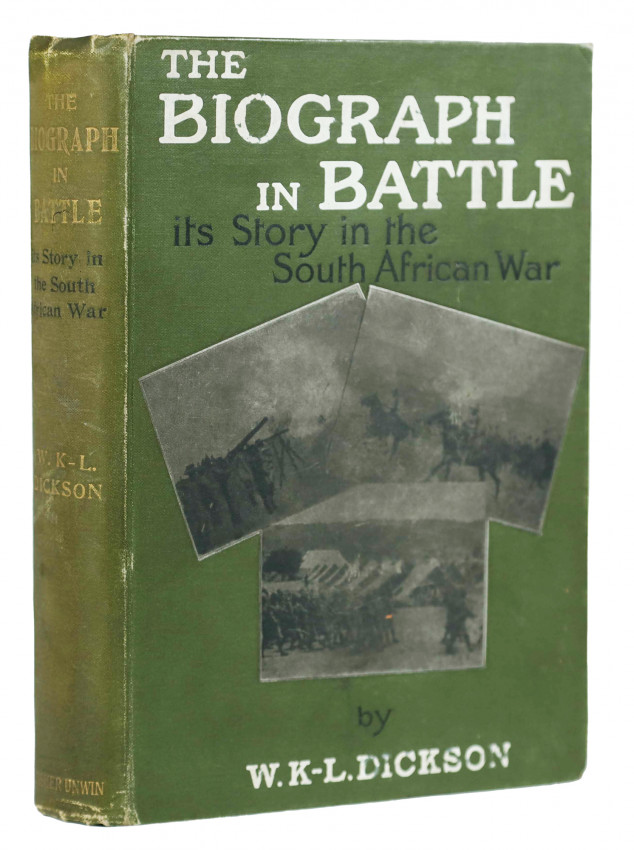 THE BIOGRAPH IN BATTLE

Its Story in the South African War related with Personal Experiences, illustrated from photographs and sketches by the author

Mendelssohn (Sidney) South African Bibliography volume 1, pages 469 – 470: Mr. Dickson was the first man to reproduce actual battles by the biograph in the South African War. He obtained some unique privileges and permits from the military authorities, "so that he saw and heard things which probably came within the ken of no other civilian he was able to get photographs of things which never before came into the eye of the camera." He succeeded in recording the annexation ceremony at Bloemfontein and the hoisting of the British flag at Pretoria, thus preserving the actual living representation of these important events for future generations. Mr. Dickson, who left England in October 1899, went through the Natal campaign under General Buller, and he gives some vivid accounts of several of the engagements. Returning to Cape Town after the relief of Ladysmith, he proceeded to the Orange Free State and Transvaal, and was in time to witness many stirring scenes in these countries.

Hackett (R.G.) South African War Books, An Illustrated Bibliography (1994), page 101: Observations of a film pioneer in South Africa. Dickson joined general Buller's Army in Natal and witnessed events at Colenso, Spion Kop and the entry of Ladysmith. He later joined Lord Roberts force in the western advance filming the annexation ceremony at Bloemfontein and the hoisting of the British flag at Pretoria.